Trading with the Enemy: The Making of Us Export Control Policy Toward the People's Republic of China (Paperback) 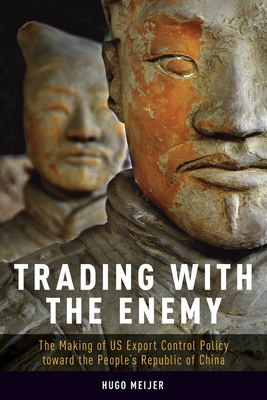 Trading with the Enemy: The Making of Us Export Control Policy Toward the People's Republic of China (Paperback)


Not On Our Shelves—Ships in 1-5 Days
(This book cannot be returned.)
In light of the intertwining logics of military competition and economic interdependence at play in US-China relations, Trading with the Enemy examines how the United States has balanced its potentially conflicting national security and economic interests in its relationship with the People's Republic of China (PRC). To do so, Hugo Meijer investigates a strategically sensitive yet under-explored facet of US-China relations: the making of American export control policy on military-related technology transfers to China since 1979. Trading with the Enemy is the first monograph on this dimension of the US-China relationship in the post-Cold War. Based on 199 interviews, declassified documents, and diplomatic cables leaked by Wikileaks, two major findings emerge from this book. First, the US is no longer able to apply a strategy of military/technology containment of China in the same way it did with the Soviet Union during the Cold War. This is because of the erosion of its capacity
to restrict the transfer of military-related technology to the PRC. Secondly, a growing number of actors in Washington have reassessed the nexus between national security and economic interests at stake in the US-China relationship -- by moving beyond the Cold War trade-off between the two -- in order to maintain American military preeminence vis- -vis its strategic rivals. By focusing on how states manage the heterogeneous and potentially competing security and economic interests at stake in a bilateral relationship, this book seeks to shed light on the evolving character of interstate rivalry in a globalized economy, where rivals in the military realm are also economically interdependent.

Hugo Meijer is Marie Sklodowska-Curie Fellow at the European University Institute (EUI), Robert Schuman Centre for Advanced Studies. He is also the Academic Director of The European Initiative on Security Studies, a network of over sixty universities that share the goal of consolidating security studies in Europe. Previously, he was Lecturer in Defence Studies at King's College London (2013-2016) and a Researcher at the Institute for Strategic Research (IRSEM, Paris, 2016-2017). He received his PhD in International Relations from Sciences Po in 2013.