Pick a Pocket or Two: A History of British Musical Theatre (Hardcover) 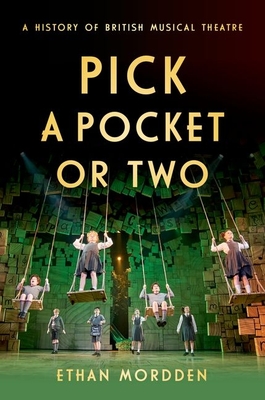 Pick a Pocket or Two: A History of British Musical Theatre (Hardcover)


Not On Our Shelves—Ships in 1-5 Days
From Gilbert and Sullivan to Andrew Lloyd Webber, from Julie Andrews to Hugh Jackman, from Half a Sixpence to Matilda, Pick a Pocket Or Two is the story of the British musical: where it began and how it developed. In Pick a Pocket Or Two, acclaimed author Ethan Mordden brings his wit and wisdom to bear in telling the full history of the British musical, from The Beggar's Opera (1728) to the present, with an interest in isolating the unique qualities of the form and its influence on the American model. To place a very broad generalization, the American musical is regarded as largely about ambition fulfilled, whereas the British musical is about social order. Oklahoma 's Curly wins the heart of the farmer Laurey--or, in other words, the cowboy becomes a landowner, establishing a truce between the freelancers on horseback and the ruling class. Half a Sixpence, on the other hand, finds a working-class boy coming into a fortune and losing it to fancy Dans, whereupon he is reunited with his working-class sweetheart, his modest place in the social order affirmed. Anecdotal and evincing a strong point of view, the book covers not only the shows and their authors but the personalities as well--W. S. Gilbert trying out his stagings on a toy theatre, Ivor Novello going to jail for abusing wartime gas rationing during World War II, fabled producer C. B. Cochran coming to a most shocking demise for a man whose very name meant classy, carefree entertainment. Unabashedly opinionated and an excellent stylist, author Ethan Mordden provokes as much as he pleases. Mordden is the preeminent historian of the form, and his book will be required reading for readers of all walks, from the most casual of musical theater goers to musical theater buffs to students and scholars of the form.