Family Sacrifices: The Worldviews and Ethics of Chinese Americans (Hardcover) 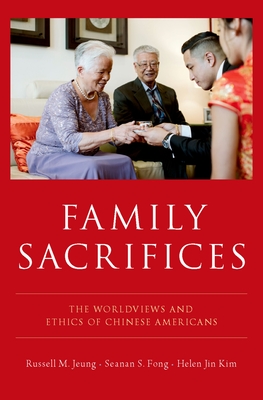 Family Sacrifices: The Worldviews and Ethics of Chinese Americans (Hardcover)


Not On Our Shelves—Ships in 1-5 Days
Fifty-two percent of Chinese Americans report having no religious affiliation, making them the least religiously-identified ethnic group in the United States. But that statistic obscures a much more complex reality. Family Sacrifices reveals that Chinese Americans employ familism, not
religion, as the primary narrative by which they find meaning, identity, and belonging. As a transpacific lived tradition, Chinese American familism prioritizes family above other commitments and has roots in Chinese Popular Religion and Confucianism. The spiritual and ethical systems of China
emphasize practicing rituals and cultivating virtue, whereas American religious research usually focuses on belief in the supernatural or belonging to a religious tradition. To address this gap in understanding, Family Sacrifices introduces the concept of liyi, translated as ritual propriety and
righteous relations. Re-appropriated from its original Chinese usage, liyi offers a new way of understanding Chinese religion and a new lens for understanding the emergence of religious nones in the United States. The first book based on national survey data on Asian American religious practices,
Family Sacrifices is a seminal text on the fastest-growing racial group in the United States.
Dr. Russell M. Jeung is Chair and Professor of Asian American Studies at San Francisco State University. The author of books and articles on Asian Americans, religion, and race, he's a community activist and church leader in East Oakland, California. Dr. Jeung's memoir, At Home in Exile, shares hisfamily's six generations in the US and his life with refugees. Seanan S. Fong is a writer and Unitarian Universalist minister with a focus on serving the spiritual needs of Asian Americans. He holds a BA in philosophy from Stanford University and an MDiv from Harvard Divinity School. He also works as a product designer and conflict resolution professional inSan Francisco. Dr. Helen Jin Kim is Assistant Professor of American Religious History at Emory University. She completed her PhD in the Committee on the Study of Religion at Harvard University and her BA in Comparative Studies in Race and Ethnicity at Stanford University.