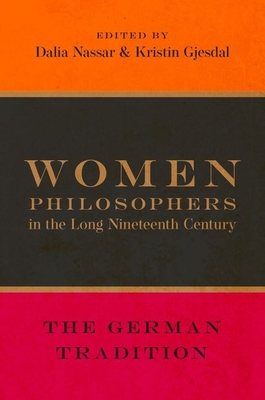 
Not On Our Shelves—Ships in 1-5 Days
The long nineteenth-century--the period beginning with the French Revolution and ending with World War I--was a transformative period for women philosophers in German-speaking countries and contexts. The period spans romanticism and idealism, socialism, Nietzscheanism, and phenomenology, philosophical movements we most often associate with Hegel, Schopenhauer, Kierkegaard, Nietzsche, and Marx--but rarely with women. Yet women philosophers not only contributed to these movements, but also spearheaded debates about their social and political implications. While today their works are less well-known than those of their male contemporaries, many of these women philosophers were widely-read and influential in their own time. Their contributions shed important new light on nineteenth-century philosophy and philosophy more generally: revealing the extent to which various movements which we consider distinct were joined, and demonstrating the degree to which philosophy can transform
lives and be transformed by lived experiences and practices. In the nineteenth century, women philosophers explored a wide range of philosophical topics and styles. Working within and in dialogue with popular philosophical movements, women philosophers helped shape philosophy's agenda and provided unique approaches to existential, political, aesthetic, and epistemological questions. Though largely deprived formal education and academic positions, women thinkers developed a way of philosophizing that was accessible, intuitive, and activist in spirit. The present volume makes available to English-language readers--in many cases for the first time--the works of nine women philosophers, with the hope of stimulating further interest in and scholarship on their works. The volume includes a comprehensive introduction to women philosophers in the nineteenth century and introduces each philosopher and her position. The translations are furnished with explanatory footnotes. The volume is designed to be accessible to students as well as scholars.

Dalia Nassar is Associate Professor of Philosophy at the University of Sydney. She works on the history of modern German philosophy, aesthetics, the philosophy of nature and environmental philosophy. She is the author of The Romantic Absolute: Being and Knowing in Early German Romantic Philosophy (University of Chicago Press, 2014) and editor of The Relevance of Romanticism (Oxford University Press, 2014). Kristin Gjesdal is Professor of Philosophy at Temple University, Philadelphia. Her research covers eighteenth- and nineteenth-century philosophy, hermeneutics, aesthetics, and phenomenology. She is the author of three monographs, most recently The Drama of History: Ibsen, Hegel, Nietzsche (Oxford University Press, 2020) and editor or co-editor of seven further volumes.