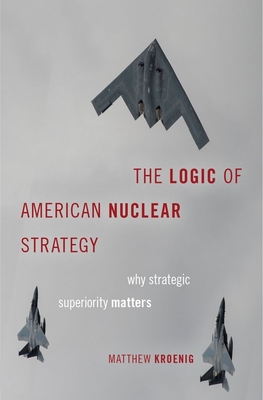 
Not On Our Shelves—Ships in 1-5 Days
For decades, the reigning scholarly wisdom about nuclear weapons policy has been that the United States only needs the ability to absorb an enemy nuclear attack and still be able to respond with a devastating counterattack. This argument is reasonable, but, empirically, we see that the US has always maintained a nuclear posture that is much more robust than a mere second-strike capability. In The Logic of American Nuclear Strategy, Matthew Kroenig challenges the conventional wisdom and explains why a robust nuclear posture, above and beyond a mere second-strike capability, contributes to a state's national security goals. In fact, when a state has a robust nuclear weapons force, such a capability reduces its expected costs in a war, provides it with bargaining leverage, and ultimately enhances nuclear deterrence. Buoyed by an innovative thesis and a vast array of historical and quantitative evidence, this book provides the first coherent theoretical explanation for why military
nuclear advantages translate into geopolitical advantages. In so doing, it resolves one of the most-intractable puzzles in international security studies.

Matthew Kroenig is an Associate Professor in the Department of Government and the Edmund A. Walsh School of Foreign Service at Georgetown University and the Deputy Director of the Scowcroft Center for Strategy and Security at the Atlantic Council. He is the author or editor of seven books, including The Return of Great Power Rivalry: Democracy versus Autocracy from the Ancient World to the Present.