Dying to Be Normal: Gay Martyrs and the Transformation of American Sexual Politics (Hardcover) 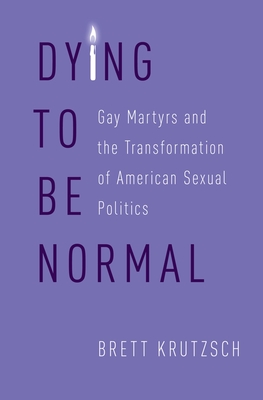 Dying to Be Normal: Gay Martyrs and the Transformation of American Sexual Politics (Hardcover)


Not On Our Shelves—Ships in 1-5 Days
Finalist, Best LGBTQ Nonfiction Book, Lambda Literary Awards 2020 On October 14, 1998, five thousand people gathered on the steps of the U.S. Capitol to mourn the death of Matthew Shepard, a gay college student who had been murdered in Wyoming eight days earlier. Politicians and celebrities addressed the crowd and the televised national audience to share their grief with the country. Never before had a gay citizen's murder elicited such widespread outrage or concern from straight Americans. In Dying to Be Normal, Brett Krutzsch argues that gay activists memorialized people like Shepard as part of a political strategy to present gays as similar to the country's dominant class of white, straight Christians. Through an examination of publicly mourned gay deaths, Krutzsch counters the common perception that LGBT politics and religion have been oppositional and reveals how gay activists used religion to bolster the argument that gays are essentially the same as straights, and therefore deserving of equal rights. Krutzsch's analysis turns to the memorialization of Shepard, Harvey Milk, Tyler Clementi, Brandon Teena, and F. C. Martinez, to campaigns like the It Gets Better Project, and national tragedies like the Pulse nightclub shooting to illustrate how activists used prominent deaths to win acceptance, influence political debates over LGBT rights, and encourage assimilation. Throughout, Krutzsch shows how, in the fight for greater social inclusion, activists relied on Christian values and rhetoric to portray gays as upstanding Americans. As Krutzsch demonstrates, gay activists regularly reinforced a white Protestant vision of acceptable American citizenship that often excluded people of color, gender-variant individuals, non-Christians, and those who did not adhere to Protestant Christianity's sexual standards. The first book to detail how martyrdom has influenced national debates over LGBT rights, Dying to Be Normal establishes how religion has shaped gay assimilation in the United States and the mainstreaming of particular gays as normal Americans.

Brett Krutzsch is Coordinator of the Center for Religion and Media and Instructor in the Department of Religious Studies at New York University. His scholarship examines intersections of religion, sexuality, gender, race, and politics in the United States.