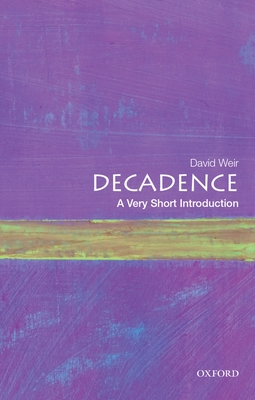 
In Stock—Click for Locations
The history of decadent culture runs from ancient Rome to nineteenth-century Paris, Victorian London, fin de si cle Vienna, Weimar Berlin, and beyond. The decline of Rome provides the pattern for both aesthetic and social decadence, a pattern that artists and writers in the nineteenth century
imitated, emulated, parodied, and otherwise manipulated for aesthetic gain. What begins as the moral condemnation of modernity in mid-nineteenth century France on the part of decadent authors such as Charles Baudelaire ends up as the perverse celebration of the pessimism that accompanies imperial
decline. This delight in decline informs the rich canon of decadence that runs from Joris-Karl Huysmans's Rebours to Oscar Wilde's The Picture of Dorian Gray, Aubrey Beardsley's drawings, Gustav Klimt's paintings, and numerous other works. In this Very Short Introduction, David Weir explores the conflicting attitudes towards modernity present in decadent culture by examining the difference between aesthetic decadence--the excess of artifice--and social decadence, which involves excess in a variety of forms, whether perversely
pleasurable or gratuitously cruel. Such contrariness between aesthetic and social decadence led some of its practitioners to substitute art for life and to stress the importance of taste over morality, a maneuver with far-reaching consequences, especially as decadence enters the realm of popular
culture today. ABOUT THE SERIES: The Very Short Introductions series from Oxford University Press contains hundreds of titles in almost every subject area. These pocket-sized books are the perfect way to get ahead in a new subject quickly. Our expert authors combine facts, analysis, perspective, new ideas, and
enthusiasm to make interesting and challenging topics highly readable.

David Weir is Professor Emeritus of Comparative Literature at Cooper Union, where he taught literature, linguistics, and cinema for 30 years. He has published books on Jean Vigo, James Joyce, William Blake, orientalism, anarchism, and decadence.