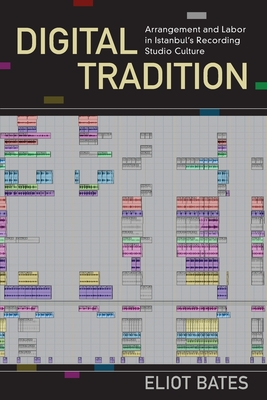 
Not On Our Shelves—Ships in 1-5 Days
Istanbul is home to a multimillion dollar transnational music industry, which every year produces thousands of digital music recordings, including widely distributed film and television show soundtracks. Today, this centralized industry is responding to a growing global demand for Turkish, Kurdish, and other Anatolian ethnic language productions, and every year, many of its top-selling records incorporate elaborately orchestrated arrangements of rural folksongs. What accounts for the continuing demand for traditional music in local and diasporic markets? How is tradition produced in twenty-first century digital recording studios, and is there a digital aesthetics to contemporary recordings of traditional music? In Digital Traditions: Arrangement and Labor in Istanbul's Recording Studio Culture, author Eliot Bates answers these questions and more with a case study into the contemporary practices of recording traditional music in Istanbul. Bates provides an ethnography of Turkish recording studios, of arrangers and engineers, studio musicianship and digital audio workstation kinesthetics. Digital Traditions investigates the moments when tradition is arranged, and how arrangement is simultaneously a set of technological capabilities, limitations and choices: a form of musical practice that desocializes the ensemble and generates an extended network of social relations, resulting in aesthetic art objects that come to be associated with a range of affective and symbolic meanings. Rich with visual analysis and drawing on Science & Technology Studies theories and methods, Digital Traditions sets a new standard for the study of recorded music. Scholars and general readers of ethnomusicology, Middle
Eastern studies, folklore and science and technology studies are sure to find Digital Traditions an essential addition to their library.

Dr. Eliot Bates is a scholar whose work focuses on the creative use of digital music technologies and the growth of hybrid digital music economies. An ethnomusicologist by training, he has conducted over three years of field research in Turkey, and is the author of Music in Turkey: Experiencing Music, Expressing Culture (OUP, 2011) and articles on musical instruments, aesthetics, studio architecture, and the emergence of an industry for Anatolian minority language popular musics. Eliot is a Lecturer in Ethnomusicology and Popular Music Studies at the University of Birmingham (UK). In addition to his scholarly interests, since 1994 Eliot has been a performer and recording artist on the oud, most recently (with organist Baby Dee) recording and performing as The Big Bumble Bees.