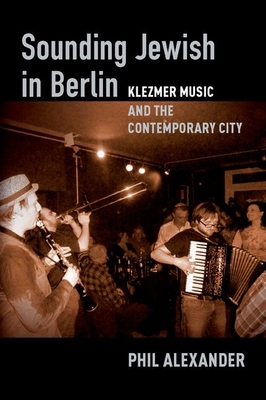 
Not On Our Shelves—Ships in 1-5 Days
How can a traditional music with little apparent historical connection to Berlin become a way of hearing and making sense of the bustling German capital in the twenty-first century? In Sounding Jewish in Berlin, author Phil Alexander explores the dialogue between the city's contemporary klezmer scene and the street-level creativity that has become a hallmark of Berlin's decidedly modern urbanity and cosmopolitanism. By tracing how klezmer music engages with the spaces and symbolic meanings of the city, Alexander sheds light on how this Eastern European Jewish folk music has become not just a product but also a producer of Berlin. This engaging study of Berlin's dynamic Yiddish music scene brings together ethnomusicology, cultural studies, and urban geography to evoke the sounds, atmospheres, and performance spaces through which klezmer musicians have built a lively set of musical networks in the city. Transcending a restrictive framework that considers this music solely in the context of troubled German-Jewish history and notions of guilt and absence, Alexander shows how Berlin's current klezmer community--a diverse group of Jewish and non-Jewish performers--imaginatively blend the genre's traditional musical language with characteristically local tones to forge an adaptable and distinctively twenty-first-century version of klezmer. Ultimately, the music's vital presence in Berlin is powerful evidence that if traditional music is to remain audible amid the noise of the urban, it must become a meaningful part of that noise.