The Happiness Effect: How Social Media Is Driving a Generation to Appear Perfect at Any Cost (Paperback) 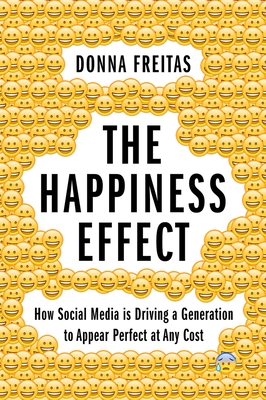 The Happiness Effect: How Social Media Is Driving a Generation to Appear Perfect at Any Cost (Paperback)


Not On Our Shelves—Ships in 1-5 Days
Sexting. Cyberbullying. Narcissism. Social media has become the dominant force in young people's lives, and each day seems to bring another shocking tale of private pictures getting into the wrong hands, or a lament that young people feel compelled to share their each and every thought with
the entire world. Have smartphones and social media created a generation of self-obsessed egomaniacs? Absolutely not, Donna Freitas argues in this provocative book. And, she says, these alarmist fears are drawing attention away from the real issues that young adults are facing. Drawing on a large-scale survey and interviews with students on thirteen college campuses, Freitas finds that what young people are overwhelmingly concerned with--what they really want to talk about--is happiness. They face enormous pressure to look perfect online--not just happy, but blissful,
ecstatic, and fabulously successful. Unable to achieve this impossible standard, they are anxious about letting the less-than-perfect parts of themselves become public. Far from wanting to share everything, they are brutally selective when it comes to curating their personal profiles, and worry
obsessively that they might unwittingly post something that could come back to haunt them later in life. Through candid conversations with young people from diverse backgrounds, Freitas reveals how even the most well-adjusted individuals can be stricken by self-doubt when they compare their
experiences with the vast collective utopia that they see online. And sometimes, as on anonymous platforms like Yik Yak, what they see instead is a depressing cesspool of racism and misogyny. Yet young people are also extremely attached to their smartphones and apps, which sometimes bring them great
pleasure. It is very much a love-hate relationship. While much of the public's attention has been focused on headline-grabbing stories, the everyday struggles and joys of young people have remained under the radar. Freitas brings their feelings to the fore, in the words of young people themselves. The Happiness Effect is an eye-opening window into
their first-hand experiences of social media and its impact on them.

Donna Freitas is a Nonresident Research Associate at the University of Notre Dame's Center for the Study of Religion and Society, and when she is not traveling for research she teaches in the Honors Colleges at Hofstra University. She is the author of Sex and the Soul: Juggling Sexuality, Spirituality, Romance and Religion on America's College Campuses (Oxford University Press, 2008), as well as several novels for young adults. A regular contributor to Publishers Weekly, she has also written for The Wall Street Journal, The New York Times, and The Washington Post.