Great Crossings: Indians, Settlers, and Slaves in the Age of Jackson (Paperback) 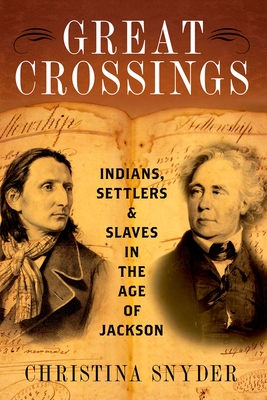 Great Crossings: Indians, Settlers, and Slaves in the Age of Jackson (Paperback)


In Stock—Click for Locations
(This book cannot be returned.)
In Great Crossings: Indians, Settlers, and Slaves in the Age of Jackson, prize-winning historian Christina Snyder reinterprets the history of Jacksonian America. Most often, this drama focuses on whites who turned west to conquer a continent, extending liberty as they went. Great Crossings
also includes Native Americans from across the continent seeking new ways to assert anciently-held rights and people of African descent who challenged the United States to live up to its ideals. These diverse groups met in an experimental community in central Kentucky called Great Crossings, home to
the first federal Indian school and a famous interracial family. Great Crossings embodied monumental changes then transforming North America. The United States, within the span of a few decades, grew from an East Coast nation to a continental empire. The territorial growth of the United States forged a multicultural, multiracial society, but that diversity also
sparked fierce debates over race, citizenship, and America's destiny. Great Crossings, a place of race-mixing and cultural exchange, emerged as a battleground. Its history provides an intimate view of the ambitions and struggles of Indians, settlers, and slaves who were trying to secure their place
in a changing world. Through deep research and compelling prose, Snyder introduces us to a diverse range of historical actors: Richard Mentor Johnson, the politician who reportedly killed Tecumseh and then became schoolmaster to the sons of his former foes; Julia Chinn, Johnson's enslaved concubine,
who fought for her children's freedom; and Peter Pitchlynn, a Choctaw intellectual who, even in the darkest days of Indian removal, argued for the future of Indian nations. Together, their stories demonstrate how this era transformed colonizers and the colonized alike, sowing the seeds of modern
America.

Christina Snyder is McCabe Greer Professor of History at Pennsylvania State University. She is the author of the award-winning Slavery in Indian Country: The Changing Face of Captivity in Early America.