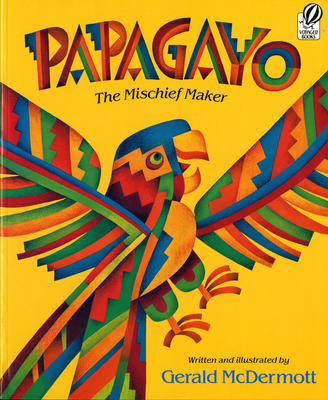 
Not On Our Shelves—Ships in 1-5 Days
The mischievous parrot Papagayo spends his days playing in the jungle and disturbing the sleeping night creatures with his raucous cries. But when the ferocious moon-dog begins to devour the moon, only Papagayo knows how to save it. The night creatures learn that he’s a good friend to have--even if he is a bit NOISY.

GERALD MCDERMOTT (1941-2012) was an internationally acclaimed author-illustrator and the creator of numerous award-winning books and animated films for children. Winner of the Caldecott Medal and two Caldecott Honors for his picture books, he was also a consultant to the Joseph Campbell Foundation on mythology in education. His acclaimed series of trickster tales consists of Raven (a Caldecott Honor Book), Zomo the Rabbit, Coyote, Jabuti, Pig-Boy, and Monkey, each of which draws from the folktale traditions of a different part of the world. www.geraldmcdermott.com