Mary Poppins in the Kitchen: A Cookery Book with a Story (Hardcover) 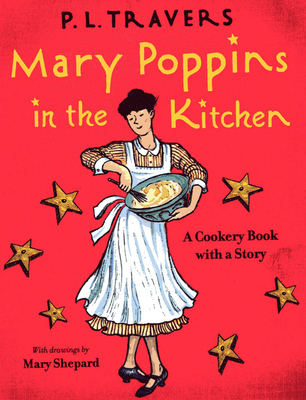 Mary Poppins in the Kitchen: A Cookery Book with a Story (Hardcover)

Get a unique glimpse at the famous Poppins cast as the spit-spot English nanny and the Banks children take over the kitchen for a week. With the help of familiar visitors like the Bird Woman, Admiral Boom, and Mr. and Mrs. Turvy, Mary Poppins teaches her irrepressible young charges the basics of cooking, from A to Z. And young readers can re-create the week's menus by following the thirty different recipes. Kitchen adventures were never so much fun!

In full color for the first time, this enchanting new edition will delight both old and new fans of the inimitable Mary Poppins.

P. L. Travers (1899-1996) was a drama critic, travel essayist, reviewer, lecturer, and the creator of Mary Poppins. Ms. Travers wrote several other books for adults and children, but it is for the character of Mary Poppins that she is best remembered.

MARY SHEPARD (1910-2000) was the daughter of Ernest Shepard, illustrator of the Winnie the Pooh books and The Wind in the Willows. She illustrated P. L. Travers's Mary Poppins books for more than fifty years.