Mississippi Jack: Being an Account of the Further Waterborne Adventures of Jacky Faber, Midshipman, Fine Lady, and Lily of the West (Bloody Jack Adventures #5) (Hardcover) 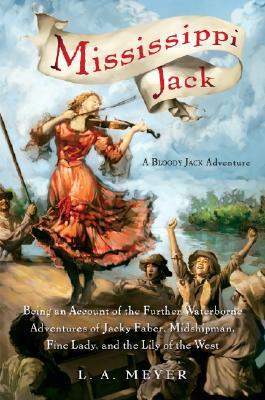 Mississippi Jack: Being an Account of the Further Waterborne Adventures of Jacky Faber, Midshipman, Fine Lady, and Lily of the West (Bloody Jack Adventures #5) (Hardcover)

This is book number 5 in the Bloody Jack Adventures series.

The intrepid Jacky Faber, having once again eluded British authorities, heads west, hoping that no one will recognize her in the wilds of America. There she tricks the tall-tale hero Mike Fink out of his flatboat, equips it as a floating casino-showboat, and heads south to New Orleans, battling murderous bandits, British soldiers, and other scoundrels along the way. Will Jacky's carelessness and impulsive actions ultimately cause her beloved Jaimy to be left in her wake?
Bold, daring, and downright fun, Jacky Faber proves once again that with resilience and can-do spirit, she can wiggle out of any scrape . . . well, almost.

L. A. Meyer (1942–2014) was the acclaimed writer of the Bloody Jack Adventure series, which follows the exploits of an impetuous heroine who has fought her way up from the squalid streets of London to become an adventurer of the highest order. Mr. Meyer was an art teacher, an illustrator, a designer, a naval officer, and a gallery owner. All of those experiences helped him in the writing of his curious tales of the beloved Jacky Faber. Visit www.jackyfaber.com for more information on the author and his books.

"The fun rolls on like the mighty Mississippi . . . Jacky continues to amaze readers with her clever plots, narrow escapes, and the uncanny ability to outwit thieves and bureaucrats, make money, and have some fun. Fans will look forward to the next installment."--VOYA (4Q) —