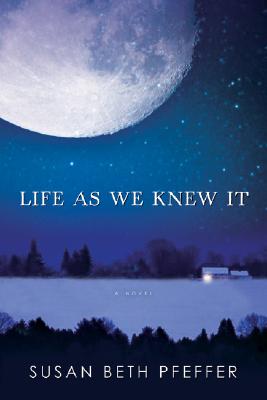 This is book number 1 in the Life As We Knew It Series series.

I guess I always felt even if the world came to an end, McDonald’s still would be open.

High school sophomore Miranda’s disbelief turns to fear in a split second when an asteroid knocks the moon closer to Earth, like "one marble hits another." The result is catastrophic. How can her family prepare for the future when worldwide tsunamis are wiping out the coasts, earthquakes are rocking the continents, and volcanic ash is blocking out the sun? As August turns dark and wintery in northeastern Pennsylvania, Miranda, her two brothers, and their mother retreat to the unexpected safe haven of their sunroom, where they subsist on stockpiled food and limited water in the warmth of a wood-burning stove.

Told in a year’s worth of journal entries, this heart-pounding story chronicles Miranda’s struggle to hold on to the most important resource of all—hope—in an increasingly desperate and unfamiliar world. An extraordinary series debut!

Susan Beth Pfeffer has written several companion novels to Life As We Knew It, including The Dead and the Gone, This World We Live In, and The Shade of the Moon.

Susan Beth Pfeffer is the author of many books for teens, including the New York Times best-selling novel Life As We Knew It, which was nominated for several state awards, and its companion books, The Dead and the Gone, This World We Live In, and The Shade of the Moon. She lives in Middletown, New York.

An ALA Best Book for Young Adults A 2011 ALA Popular Paperbacks Title A CCBC Choice A Junior Library Guild Premier Selection A Listening Library Selection An Amazon.com Best Book of the Year * "Absorbing from first page to last."—Publishers Weekly, starred review

"Riveting and deeply frightening."—The Bulletin
"You will read it in one sitting, fighting back tears as you bite your nails."—Teenreads.com —