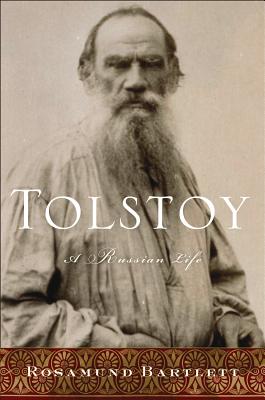 In November 1910, Count Lev Tolstoy died at a remote Russian railway station. At the time of his death, he was the most famous man in Russia, with a growing international following, and more revered than the tsar. Born into an aristocratic family, Tolstoy had spent his life rebelling against not only conventional ideas about literature and art but also traditional education, family life, organized religion, and the state.

In this, the first biography of Tolstoy in more than twenty years, Rosamund Bartlett draws extensively on key Russian sources, including much fascinating material made available since the collapse of the Soviet Union. She sheds light on Tolstoy’s remarkable journey from callow youth to writer to prophet; discusses his troubled relationship with his wife, Sonya; and vividly evokes the Russian landscapes Tolstoy so loved and the turbulent times in which he lived. Above all, Bartett gives us an eloquent portrait of the brilliant, maddening, and contrary man who has once again been discovered by a new generation of readers.

Rosamund Bartlett's previous books include Wagner and Russia and the acclaimed Chekhov: Scenes from a Life. An authority on Russian cultural history, she has also achieved renown as a translator of Chekhov.
Longlisted for the UK's BBC Samuel Johnson Prize"[Bartlett's] deep and easy familiarity with her subject and the period permits Bartlett to touch on both the thinkers and writers who engaged Tolstoy...while getting to the essence of the spiritual power that informs his work. Bartlett is particularly adept at assessing Tolstoy's impact..."
-Publishers Weekly, starred"A rich, complex life told in rich, complex prose."
-Kirkus, starred"Bartlett’s book is an exemplary literary biography."
-Library Journal, starred"[Bartlett's]Tolstoy biography should become the first resort for everyone drawn to its titanic subject."
-Booklist, starred"Rosamund Bartlett's new life of Tolstoy is a splendid book -- immensely readable, full of fresh details, and often quite brilliant in its perceptiveness about the greatest of Russian writers, and one of the stars in the western firmament. This biography has the sweep and vividness of literature itself, and I strongly recommend it."
-Jay Parini, author of The Last Station"It is difficult as a reader to take in the sheer scale and extent of Tolstoy’s interest and achievement. For the biographer to put all this into less than 500 pages is an achievement in itself. But Bartlett never seems hurried and she gives herself time to paint the scene for us, bringing the scent of Russian earth and grass to the nostrils."
-Financial Times  (UK)"The extraordinary character of the giant is captured better by Bartlett than by any previous biographer, and this is partly because she knows Russia so well... Superbly well written."
-Spectator  (UK)
For This Book...
Staff Pick