The Storyteller (The Reader #3) (Paperback) 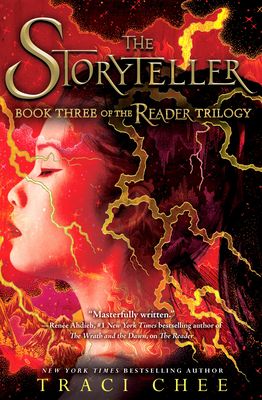 The Storyteller (The Reader #3) (Paperback)


In Stock—Click for Locations
The thrilling conclusion to the epic adventure that began with New York Times bestselling The Reader, "a series fantasy lovers will want to sink their teeth into." - Booklist, starred review

Sefia is determined to keep Archer out of the Guard's clutches and their plans for war between the Five Kingdoms. The Book, the ancient, infinite codex of the past, present and future, tells of a prophecy that will plunge Kelanna in that bloody war, but it requires a boy--Archer--and Sefia will stop at nothing to ensure his safety. The Guard has already stolen her mother, her father, and her Aunt Nin. Sefia would sooner die than let them take anymore from her--especially the boy she loves.
But escaping the Guard and the Book's prophecy is no easy task. After all, what is written always comes to pass. As Sefia and Archer watch Kelanna start to crumble to the Guard's will, they will have to choose between their love and joining a war that just might tear them apart. Full of magic, suspense, and mystery, Traci Chee brings her trilogy to a close in this spellbinding final installment.
Traci Chee is an all-around word geek, she loves book arts and art books, poetry and paper crafts. She studied literature and creative writing at the University of California, Santa Cruz, and earned a master of arts degree from San Francisco State University. Traci grew up in a small town with more cows than people, and now feels most at home in the mountains, scaling switchbacks and happening upon hidden highland lakes. She lives in California with her fast-fast dog. The Storyteller is the final book in the trilogy that began with the New York Times bestseller, The Reader.
Praise for The Storyteller:

★ “With an assurance that equals her sorcerer protagonist's, Chee constantly interrogates her central question: "who controls the story." At one point hers reaches the high-fantasy equivalent of The Monster at the End of This Book (though with significantly more elegance)… Thoroughly immersive, thoroughly satisfying.”—Kirkus, starred review

★ “In this richly realized novel, Chee has masterfully converged all of her characters into one final confrontation…as Chee pulls out all the stops to beautifully obliterate her readers' hearts.”—Booklist, starred review

★ “This is a fast-paced adventure with fully developed characters that explores memory and the power of the written word…[A] beautiful love story at its core.”—School Library Journal, starred review


Praise for The Speaker:

★ "Filled with even more magic and intrigue than its predecessor, this is a gripping follow-upthat will leave readers speculating and wanting more."—Kirkus Reviews, starred review

★ "Strategically written with elements from the previous volume, this entry is rich with twists and turns that will leave readers in constant shock while reminding them that there are no coincidences in this narrative."—School Library Journal, starred review

"Fans will be knocking down the door to read this exciting sequel."—Booklist

“Chee has once again created an unforgettable story. Filled with secrets and surprises, this fast-paced storyline draws readers in and keeps them on their toes.”—VOYA


Praise for The Reader:

“I was spellbound from the first page. An utterly transportive tale of swashbucklers and sharpshooters, masterfully written. Traci Chee has penned a beautiful novel about the power of story, complete with a fantastic cast of characters and an expertly rendered fantasy landscape. This is a book you will not soon forget.”—Renée Ahdieh, #1 New York Times bestselling author of The Wrath and the Dawn

★ “Deftly rendered in beautiful prose, narrated through three shifting time lines woven into an interconnected history of duty, honor, and magic. . . . This is a must-have for all those who value a good read with genuine character growth, mystery, unique world-building, adventure, unyielding bonds of loyalty, and pirates. . . . A fresh, diverse fantasy; highly recommended for fans of Cornelia Funke’s Inkheart and female-powered adventures.”—School Library Journal, starred review

★ “Commanding storytelling and vivid details, particularly of the magical process of reading, bring the story to life… the first of what promises to be an enchanting series.”—Kirkus Reviews, starred review

★ “Chee’s debut is an intricate, multilayered reading experience… An exploration of self-determination and the magic of the written word, Sefia’s story is an absorbing introduction to the Sea of Ink and Gold series.”—Publishers Weekly, starred review

★ “With evocative language, fascinating world building, multifaceted characters, and a compelling plot, this is a series fantasy lovers will want to sink their teeth into.”—Booklist, starred review

“Most world-building shies away from tackling the question of literacy within fantasy cultures, but here it serves as the beating meta-heart.”—NPR