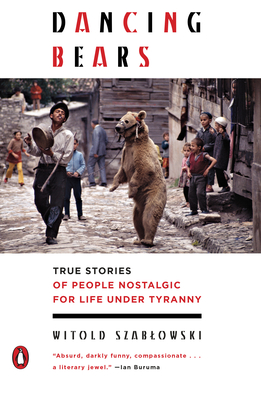 “Mixing bold journalism with bolder allegories, Mr. Szabłowski teaches us with witty persistence that we must desire freedom rather than simply expect it.” —Timothy Snyder, New York Times bestselling author of On Tyranny and The Road to Unfreedom

An incisive, humorous, and heartbreaking account of people in formerly Communist countries holding fast to their former lives, by the acclaimed author of How to Feed a Dictator

For hundreds of years, Bulgarian Gypsies trained bears to dance, welcoming them into their families and taking them on the road to perform. In the early 2000s, with the fall of Communism, they were forced to release the bears into a wildlife refuge. But even today, whenever the bears see a human, they still get up on their hind legs to dance.

In the tradition of Ryszard Kapuściński, award-winning Polish journalist Witold Szabłowski uncovers remarkable stories of people throughout Eastern Europe and in Cuba who, like Bulgaria’s dancing bears, are now free but who seem nostalgic for the time when they were not. His on-the-ground reporting—of smuggling a car into Ukraine, hitchhiking through Kosovo as it declares independence, arguing with Stalin-adoring tour guides at the Stalin Museum, sleeping in London’s Victoria Station alongside a homeless woman from Poland, and giving taxi rides to Cubans fearing for the life of Fidel Castro—provides a fascinating portrait of social and economic upheaval and a lesson in the challenges of freedom and the seductions of authoritarian rule.

From the Introduction:
“Guys with wacky hair who promise a great deal have been springing up in our part of the world like mushrooms after rain. And people go running after them, like bears after their keepers. . . . Fear of a changing world, and longing for someone . . . who will promise that life will be the same as it was in the past, are not confined to Regime-Change Land. In half the West, empty promises are made, wrapped in shiny paper like candy. And for this candy, people are happy to get up on their hind legs and dance.”
Witold Szabłowski is an award-winning Polish journalist and the author of How to Feed a Dictator. At age twenty-five he became the youngest reporter at one of Poland’s largest daily newspapers, where he covered international stories in countries including Cuba, South Africa, and Iceland, and won awards for his features on the problem of illegal immigrants flocking to the EU and the 1943 massacre of Poles in Ukraine. His book about Turkey, The Assassin from Apricot City, won two awards and was nominated for Poland’s most prestigious literary prize. Szabłowski lives in Warsaw.
A New York Times Book Review Editors’ Choice

Finalist for the Stanford Dolman Travel Book of the Year Award

“Utterly original . . . Provokes a far-reaching and unresolved conversation about what freedom might really mean.” —The New York Times Book Review

“[A] jewel of a book . . . Szabłowski writes in a simple, vivid style . . . with [a] fine sense of the comic and the absurd. . . . His allegory is humorous, ironic, frequently absurd, and sometimes dark, but always full of understanding and compassion for its subjects, both human and animal. . . . The great strength of his book is its nuanced understanding of the reasons why so many people are nostalgic for the way of life they lost when Soviet communism disappeared. . . . Anxious and confused, they are not used to thinking or working for themselves. They yearn for the old certainties. Perhaps, in the end, human beings are more like bears than we imagine.” —Orlando Figes, The New York Review of Books

“Fascinating . . . A set of case studies full of tensions and contradictions.” —The New Republic

“Universal truths about animal behavior, including our own.” —Ari Shapiro, NPR’s Guide to 2018’s Great Reads

“Szablowski is at the forefront of young Polish reporters going global.” ―The Economist

“Witold Szabłowski is a born storyteller. His reports from the post-Communist world read like fairy-tales with the stench of reality. Absurd, darkly funny, compassionate, his book is a literary jewel.” —Ian Buruma, author of Year Zero and Murder in Amsterdam

“One of the truest and most beautiful things I’ve read.” —Tim Flannery, bestselling author of The Weather Makers

“Should be required reading for anyone hoping to understand the growing appeal of authoritarian leaders in Eastern Europe today . . . Combining black humor with lyrical prose, Szabłowski brilliantly captures the tragic disorientation of men and women whose lives were bifurcated by the sudden collapse of Communism and ruthless onslaught of neoliberal capitalism. . . . A poignant allegory about the human costs of regime change.” —Kristen Ghodsee, author of Why Women Have Better Sex Under Socialism and Red Hangover: Legacies of Twentieth-Century Communism

“A fascinating and wide-ranging book that shows how, across different and diverse species, old habits die slowly, if at all. Humans, like other animals, often don’t know when they’ve gained freedom because conditions of oppression have become the norm and they’re unable to adjust to a newfound lack of restraint. Szabłowski’s clever and metaphorical use of dancing bears to make this point is beautifully done.” —Marc Bekoff, University of Colorado; coauthor of The Animals’ Agenda: Freedom, Compassion, and Coexistence in the Age of Humans

“What a gem of a book. . . . So eloquent and original about the psychological transition from regimes.” —Ruth Ben-Ghiat, author of Strongmen: Mussolini to the Present

“A brisk narrative [and] a surprising look at societies grappling with profound change.” —Kirkus Reviews

“A fascinating portrait of social and economic upheaval and a lesson in the challenges of freedom and the seductions of authoritarian rule.” —The Awl