Istanbul: City of Majesty at the Crossroads of the World (Paperback) 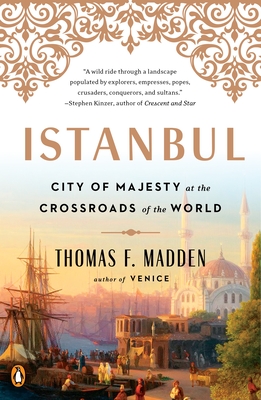 Istanbul: City of Majesty at the Crossroads of the World (Paperback)

The first single-volume history of Istanbul in decades: a biography of the city at the center of civilizations past and present.

For more than two millennia Istanbul has stood at the crossroads of the world, perched at the very tip of Europe, gazing across the shores of Asia. The history of this city--known as Byzantium, then Constantinople, now Istanbul--is at once glorious, outsized, and astounding. Founded by the Greeks, its location blessed it as a center for trade but also made it a target of every empire in history, from Alexander the Great and his Macedonian Empire to the Romans and later the Ottomans. At its most spectacular Emperor Constantine I re-founded the city as New Rome, the capital of the eastern Roman empire, and dramatically expanded the city, filling it with artistic treasures, and adorning the streets with opulent palaces. Around it all Constantine built new walls, truly impregnable, that preserved power, wealth, and withstood any aggressor--walls that still stand for tourists to visit.
From its ancient past to the present, we meet the city through its ordinary citizens--the Jews, Muslims, Italians, Greeks, and Russians who used the famous baths and walked the bazaars--and the rulers who built it up and then destroyed it, including Mustafa Kemal Ataturk, the man who christened the city "Istanbul" in 1930. Thomas F. Madden's entertaining narrative brings to life the city we see today, including the rich splendor of the churches and monasteries that spread throughout the city.
Istanbul draws on a lifetime of study and the latest scholarship, transporting readers to a city of unparalleled importance and majesty that holds the key to understanding modern civilization. In the words of Napoleon Bonaparte, "If the Earth were a single state, Istanbul would be its capital."
Thomas F. Madden is Professor of History and Director of the Center for Medieval and Renaissance Studies at Saint Louis University. He has written and lectured extensively on the ancient and medieval Mediterranean as well as the history of Christianity and Islam. Awards for his scholarship include the Medieval Academy of America's Haskins Medal and the Medieval Institute's Otto Grundler Prize. He is a Fellow of the John Simon Guggenheim Foundation, the American Council of Learned Societies, and the Medieval Academy of America. His books include Venice: A New History and Istanbul: City of Majesty at the Crossroads of the World.
Praise for Istabul

“A wonderfully vivid and clear account . . . [Madden is] a skilled narrator, negotiating the twists and turns in the city’s destiny.”
—The Economist

“A natural teacher, Madden packs most of the city’s past into a short, readable volume in which each era is brought alive by punchy anecdotes with vivid sketches of people and locations.”
—The Economist's 1843 magazine

“Condensing Istanbul’s history in a single volume is a daunting challenge; the book is a great success, and one with no lack of drama. . . . Even the careless reader will be much enlightened by the book, as good an introduction to Istanbul and its splendors as one could hope to have.”
—National Review

“A major 'biography' of a city at the center of the world, Madden documents the history of the place that has been home to Greeks and Ottomans, Muslims and Jews, the ancient world and the society of the future.”
—Time

“A comprehensive and illuminating account of this remarkable city . . . brought together ‘into one enjoyable and clear narrative.’ There’s a great deal to gain from reading this book.”
—PopMatters

“Vivid . . . Madden’s insights into Istanbul’s religious and political history reminds us that world politics is rife with complex questions: Who came first? Who built enduring cities? Who survived? Who vanished? And where do we go from here?”
—Booklist

“Astonishing . . . An illuminating journey through the history and culture of the metropolis that 'still towers over all other cities in Europe and the Middle East.'”
—Kirkus Reviews

“No place has had a better claim than Istanbul to being the historical center of our planet—capital to multiple empires, a focal point of Christianity and Islam, and now a global transport and commercial hub. Writing with verve and sympathy, Thomas F. Madden weaves scholarship, travel, and literature into a compelling narrative of crushing loss and unexpected renewal.”
—Charles King, author of Midnight at the Pera Palace: The Birth of Modern Istanbul

“There may be other cities as majestic and rich in history as Istanbul, but few have been blessed with such a chronicler. Istanbul takes us on a wild ride through a landscape populated by explorers, lascivious empresses, popes, crusaders, conquerors, and sultans. It's almost as much fun as actually visiting.”
—Stephen Kinzer, author of Crescent and Star: Turkey between two worlds