A Man Without Breath: A Bernie Gunther Novel (Paperback) 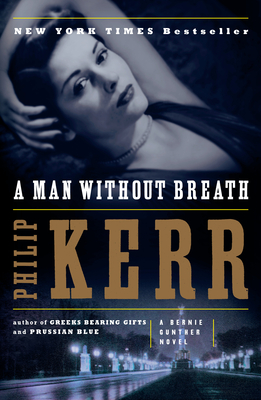 A Man Without Breath: A Bernie Gunther Novel (Paperback)


Special Order—Subject to Availability
Bernie Gunther enters a dangerous battleground when he investigates crimes on the Eastern Front at the height of World War 2 in this gripping historical mystery from New York Times bestselling author Philip Kerr.

Berlin, 1943. A month has passed since Stalingrad. Though Hitler insists Germany is winning the war, morale is low and commanders on the ground know better. Then Berlin learns of a Red massacre of Polish troops near Smolensk, Russia. In a rare instance of agreement, both the Wehrmacht and Propaganda Minister Goebbels want irrefutable evidence of this Russian atrocity. And so Bernie Gunther is dispatched.

In Smolensk, Bernie finds an enclave of Prussian aristocrats who look down at the wise-cracking, rough-edged Berlin bull. But Bernie doesn’t care about fitting in. He only wants to uncover the identity of a savage killer—before becoming a victim himself.
Philip Kerr was the New York Times bestselling author of the acclaimed Bernie Gunther novels, three of which—Field Gray, The Lady from Zagreb, and Prussian Blue—were finalists for the Edgar Award for Best Novel. Kerr also won several Shamus Awards and the British Crime Writers’ Association Ellis Peters Award for Historical Crime Fiction. Just before his death in 2018, he was made a Fellow of the Royal Society of Literature. As P.B. Kerr, he was the author of the much-loved young adult fantasy series Children of the Lamp.
Praise for Philip Kerr and the Bernie Gunther Novels