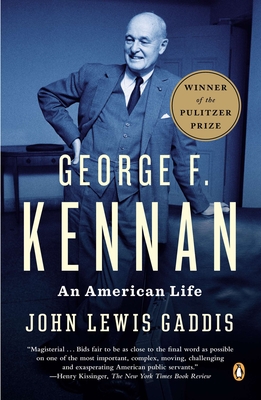 
Backordered
Winner of the 2012 Pulitzer Prize in Biography

Widely and enthusiastically acclaimed, this is the authorized, definitive biography of one of the most fascinating but troubled figures of the twentieth century by the nation's leading Cold War historian. In the late 1940s, George F. Kennan—then a bright but, relatively obscure American diplomat—wrote the "long telegram" and the "X" article. These two documents laid out United States' strategy for "containing" the Soviet Union—a strategy which Kennan himself questioned in later years. Based on exclusive access to Kennan and his archives, this landmark history illuminates a life that both mirrored and shaped the century it spanned.

John Lewis Gaddis is the Robert A. Lovett Professor of History at Yale University. His previous books include The United States and the Origins of the Cold War; Strategies of Containment; The Long Peace; We Now Know; The Landscape of History; Surprise, Security, and the American Experience; and The Cold War: A New History. Professor Gaddis teaches courses on Cold War history, grand strategy, international studies, and biography; has won two Yale undergraduate teaching awards; was a 2005 recipient of the National Humanities Medal; and is the winner of the 2012 Pulitzer Prize in Biography for George F. Kennan.
For This Book...
Staff Pick