The Quest: Energy, Security, and the Remaking of the Modern World (Paperback) 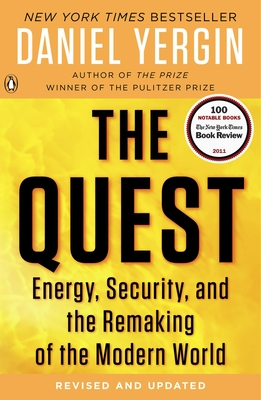 The Quest: Energy, Security, and the Remaking of the Modern World (Paperback)


Not On Our Shelves—Ships in 1-5 Days
“A sprawling story richly textured with original material, quirky details and amusing anecdotes . . .” —Wall Street Journal

“It is a cause for celebration that Yergin has returned with his perspective on a very different landscape . . . [I]t is impossible to think of a better introduction to the essentials of energy in the 21st century. The Quest is . . . the definitive guide to how we got here.” —The Financial Times

This long-awaited successor to Daniel Yergin’s Pulitzer Prize-winning The Prize provides an essential, overarching narrative of global energy, the principal engine of geopolitical and economic change

A master storyteller as well as a leading energy expert, Daniel Yergin continues the riveting story begun in his Pulitzer Prize–winning book, The Prize. In The Quest, Yergin shows us how energy is an engine of global political and economic change and conflict, in a story that spans the energies on which our civilization has been built and the new energies that are competing to replace them.

The Quest tells the inside stories, tackles the tough questions, and reveals surprising  insights about coal, electricity, and natural gas. He explains how climate change became a great issue and leads readers through the rebirth of renewable energies, energy independence, and the return of the electric car. Epic in scope and never more timely, The Quest vividly reveals the decisions, technologies, and individuals that are shaping our future.
Daniel Yergin is a highly respected authority on energy, international politics, and economics, and the Pulitzer Prize-winning and bestselling author of The Prize: The Epic Quest for Oil, Money & Power, The Quest: Energy, Security, and the Remaking of the Modern World, and Shattered Peace: The Origins of the Cold War, and coauthor of Commanding Heights: The Battle for the World Economy. He is vice chairman of IHS Markit, one of the leading information and research firms in the world, a member of the board of the Council on Foreign Relations, a senior trustee of the Brookings Institution, and has served on the Secretary of Energy Advisory Board under the last four presidential administrations.


“Mr. Yergin is back with a sequel to The Prize. It is called The Quest: Energy, Security, and the Remaking of the Modern World, and, if anything, it’s an even better book. It is searching, impartial and alarmingly up to date . . . The Quest will be necessary reading for C.E.O.’s, conservationists, lawmakers, generals, spies, tech geeks, thriller writers, ambitious terrorists and many others . . . The Quest is encyclopedic in its ambitions; it resists easy synopsis.” —Dwight Garner,
The New York Times

“It is a cause for celebration that Yergin has returned with his perspective on a very different landscape . . . [I]t is impossible to think of a better introduction to the essentials of energy in the 21st century. In Yergin’s lucid, easy prose, the 800 pages flow freely . . . The Quest is . . . the definitive guide to how we got here.” —The Financial Times

“An important book . . . a valuable primer on the basic issues that define energy today. Yergin is careful in his analysis and never polemical . . . Despite that, The Quest makes it clear that energy policy is not on the right course anywhere in the world and that everyone—on the left and the right, in the developed and the developing world—need to rethink strongly held positions.” —Fareed Zakaria, New York Times Book Review

“Mr Yergin’s previous book, The Prize, a history of the global oil industry, had the advantage of an epic tale and wondrous timing . . . The Quest, as its more open-ended title suggests, is a broader and more ambitious endeavour . . . The Quest is a masterly piece of work and, as a comprehensive guide to the world’s great energy needs and dilemmas, it will be hard to beat.” —The Economist

“The Quest is a book—a tour de force, really—that evaluates the alternatives to oil so broadly and deeply that the physical tome could double as a doorstop . . . It is best read slowly, perhaps one chapter per day maximum, if the goal is to actually absorb the rich detail and sometimes complicated workings described by Yergin.” —USA Today