A Jane Austen Education: How Six Novels Taught Me About Love, Friendship, and the Things That Really Matter (Paperback) 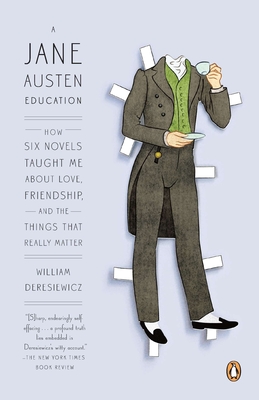 A Jane Austen Education: How Six Novels Taught Me About Love, Friendship, and the Things That Really Matter (Paperback)

“Austen lovers, rejoice! This intelligent, lively look at the beloved author's novels and what they offered in life lessons to one graduate student will resonate with all Austen fans - and others as well. Like many of us, Deresiewicz, an Austen scholar, found deep lessons on life, love, friendship, and marriage in the pages and parlors of dear Jane's books. A delightful read!”
— Christine Grabish, MacDonald Book Shop, Estes Park, CO

Before Jane Austen, William Deresiewicz was a very different young man. A sullen and arrogant graduate student, he never thought Austen would have anything to offer him. Then he read Emma—and everything changed.

In this unique and lyrical book, Deresiewicz weaves the misadventures of Austen’s characters with his own youthful follies, demonstrating the power of the great novelist’s teachings—and how, for Austen, growing up and making mistakes are one and the same. Honest, erudite, and deeply moving, A Jane Austen Education is the story of one man’s discovery of the world outside himself.

WILLIAM DERESIEWICZ is a widely published book critic and the author of Jane Austen and the Romantic Poets. He was nominated for National Magazine Awards in 2008, 2009, and 2011 and the National Book Critics Circle’s Nona Balakian Citation for Excellence in Reviewing in 2010 and 2011.

“Like Austen, Deresiewicz is lucid, principled and knows how to think as well as how to feel, without ever sacrificing one to the other…. a delightful and enlightening book. — SLATE.COM

“An entertaining and original version of literary criticism—as autobiography.” — THE SEATTLE TIMES

“With A Jane Austen Education, Deresiewicz writes with discerning wit and quiet perception about the lessons in friendship, empathy, honesty, happiness, and love he learns from each of Austen's immortal novels.” — CHICAGO TRIBUNE

“[Deresiewicz] is charming on the page. He talks about literary characters as if they were real people, and about Austen as if she lived at the end of the block…he does so in a style that comes across as fresh and conversational, like a genuinely witty bibliophile you’d like to talk with at a party. " — LOS ANGELES REVIEW OF BOOKS

“[Deresiewicz] writes with wit, charm and candor, and the result is simply delightful." — ASSOCIATED PRESS