The Turquoise Ledge: A Memoir (Paperback) 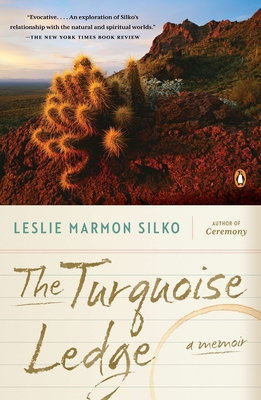 The Turquoise Ledge: A Memoir (Paperback)

“Novelist Silko's memoir invites readers to travel with her outside her home in the Tucson Mountains and deep into the arroyos and foothills of the Sonoran Desert. Where others see a barren landscape, she finds a lushness and a home. Even bits of the land, the turquoise, reach out to her. To read Silko's writing is to enter into a space in which our assumptions about time, family, relatedness, and nature are upended. The stories she tells are beautiful, haunting and true.”
— Karen Maeda Allman, Elliot Bay Book Co., Seattle, WA

Profound reflections on family and the natural world-from the legendary Native American author.

With the publication of Ceremony in 1978, Leslie Marmon Silko established herself as a storyteller of unique power and brilliance. Now, in her first work of nonfiction, Silko combines memoir with family history and observations on the creatures and desert landscapes that command her attention and inform her vision of the world. Ambitious in scope and full of wonderfully plainspoken and evocative lyricism, The Turquoise Ledge is both an exploration of Silko's experience and a moving and deeply personal contemplation of the enormous spiritual power of the natural world.

Leslie Marmon Silko is the author of the novels Ceremony, Almanac of the Dead, and Gardens of the Dunes, as well as many short stories, poems, and essays. She lives in Tucson, Arizona.
Praise for The Turquoise Ledge:

“Engaging . . . Silko writes of many things, with affectionate portraits of friends and family and sharply observed notes on history, personal and universal . . . At dazzling moments, she pulls seemingly disconnected themes together: turquoise, rain, Aztec mythology and language, the otherworld and other worlds and, yes, snakes . . . The best parts  recount moments that many desert dwellers will instantly recognize: the near-ecstasy that comes when a cloud decides to open up and spatter a little rain on the ground, the feel of shuddering summer heat on the skin.” —The Washington Post

“Evocative . . . Less an autobiography than an exploration of [Silko’s] relationship with the natural and spiritual worlds—and it’s a very close relationship . . . there’s nothing soft about her spiritualism or her environmentalism. She knows better than most that the strong kill the weak, and sometimes devour them.” —The New York Times Book Review

“Leslie Marmon Silko writes in the language of the spirit—reading her words as she constructs a portrait of herself for this memoir is not only like being inside her head, it is like eavesdropping on her silent conversations with her gods…she thinks about things she has lost and about people in her past.  She thinks about the ghosts she has seen and what is left after the people one loves pass on . . . she thinks about the importance of animals in her life . . . sentence by sentence, the reader is given an enormous amount of useful information about how to get the most out of life, beginning in the present moment.” —The Los Angeles Times

“Leslie Marmon Silko has painted a map out of words, allowing us to not only see the world, but walk within it with the grace of one who bows toward all living things. Encompassing both Earth and Sky, The Turquoise Ledge is more than a memoir. It is a personal mythology born out of the genealogy of her ancestors. Silko listens and locates her own story in place, through memory, language, and gesture. Portraits of grasshoppers as Star Beings; a quartz crystal found in the shape of an owl; a piece of turquoise that pierces the heart; this book is a stone in hand, a talisman brought home, that both heals and inspires. Gravity is the word that comes to mind.” —Terry Tempest Williams

“Wildly informative, joyously unselfconscious, this sinuous sharing of observation, obsession, and taking care is a treasure—a classic of desert writing. In these end times when humankind’s disrespect for the earth has reached the murderous depths of true mental illness, Silko’s fresh, vivid, and slantywise correspondence with beings so refreshingly not-us is as restorative as desert rain. She blesses us with her ghost dogs, her snakes and birds and star beings. This is just a marvelous book.” —Joy Williams