The Battle for America: The Story of an Extraordinary Election (Paperback) 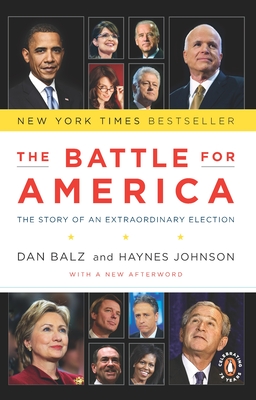 The Battle for America: The Story of an Extraordinary Election (Paperback)

The election of 2008 shattered political barriers and ignited an extraordinary battle among some of the most formidable political rivals ever to seek the presidency. Now, Dan Balz and Haynes Johnson, two of America's most respected journalists, offer the first complete picture of the strategies-and singular personalities- that accompanied the candidates' first forays into Iowa and New Hampshire through Obama's historic victory on Election Night. Filled with insider details, this riveting, wholly nonpartisan account of the historic election will capture the attention of everyone who witnessed it, as well as future generations who wished they had. A Washington Post and L.A. Times Best Book of the Year.
Dan Balz is the chief correspondent at The Washington Post and its former national editor, political editor, White House correspondent, and Southwest correspondent. He is the coauthor of two books, the New York Times bestseller The Battle for America 2008 and Storming the Gates. He is a regular panelist on PBS's Washington Week and MSNBC's The Daily Rundown.

Haynes Johnson (1931–2013) was the author of several nonfiction works, including Divided We Fall: Gambling with History in the Nineties and The Age of Anxiety: McCarthyism to Terrorism. Additionally, Johnson was a Pulitzer Prize–winning journalist and served as an advisor to Presidents Bill Clinton and Barack Obama.
"Dan Balz and Haynes Johnson ... capture the momentous contest in a polished account refreshingly free of last year's breathless sound bites, pundit insta-reaction or fixation on trifling gaffes ... an evenhanded and comprehensive account of the race...."
-Randy James, Time

"Makes for engaging reading - for both politics addicts interested in small new details and the more casual reader interested in a broad, savvy overview of the run-up to a historic election.
-Michiko Kakutani, The New York Times