Provenance: How a Con Man and a Forger Rewrote the History of Modern Art (Paperback) 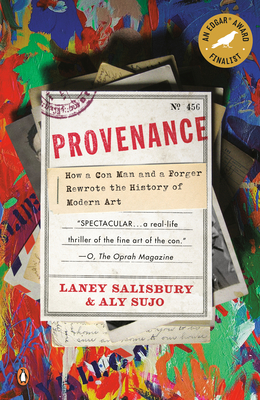 Provenance: How a Con Man and a Forger Rewrote the History of Modern Art (Paperback)

Filled with extraordinary characters and told at breakneck speed, Provenance reads like a well-plotted thriller. But this is most certainly not fiction. It is the astonishing narrative of one of the most far-reaching and elaborate cons in the history of art forgery. Stretching from London to Paris to New York, investigative reporters Laney Salisbury and Aly Sujo recount the tale of infamous con man and unforgettable villain John Drewe and his accomplice, the affable artist John Myatt. Together they exploited the archives of British art institutions to irrevocably legitimize the hundreds of pieces they forged, many of which are still considered genuine and hang in prominent museums and private collections today.
Laney Salisbury, a graduate of the Columbia University Graduate School of Journalism, has reported from Africa, the Middle East, and New York. She lives in Brooklyn, New York.

Aly Sujo was an investigative reporter, part of a husband-and-wife team with Laney Salisbury. He covered arts and entertainment for Reuters, the Associated Press, and the New York Daily News. He died in 2008.