The Slap: A Novel (Paperback) 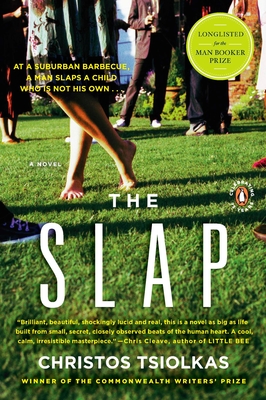 The Slap: A Novel (Paperback)

“The Slap is not just a story about a four-year-old boy whose misbehavior at a neighborhood 'barbie' in Southern Australia brings on a reaction by someone other than his father. Different opinions about whether or not the slap was warranted rapidly surface among the eight adults present and threaten to destroy loyal friendships. The boy's parents, without the full support of the husband, file a lawsuit against their friend that results in harsh, often unspoken thoughts about marriage, friendships, and love. Tsiolkas writes an honest and passionate story about how one act can change the course of many lives.”
— Annie Philbrick, Bank Square Books, Mystic, CT

The basis for the NBC event series directed by Lisa Cholodenko and starring Uma Thurman, Peter Sarsgaard, and Zachary Quinto.

In this powerful and riveting novel reminiscent of Liane Moriarty's Truly, Madly, Guilty, literary phenomenon Christos Tsiolkas unflinchingly exposes the inner workings of domestic life, friendship, and parenthood in the twenty-first century, and reminds us of the passions and malice that family loyalty can provoke. When a man slaps another couple’s child at a neighborhood barbecue, the event send unforeseeable shock waves through the lives of all who are witness to it. Told from the points of view of eight people who were present, The Slap shows how a single action can change the way people think about how they live, what they want, and what they believe forever.
Christos Tsiolkas is an award-winning novelist, playwright, essayist, and screenwriter. His fiction has won numerous prizes, including the Commonwealth Writers Award, the Age Fiction Prize, and the Melbourne Best Writing Award. The Slap is his first book published in the US.
“Tsiolkas is a hard-edged, powerful writer….The novel transcends both suburban Melbourne and the Australian continent, leaving us exhausted but gasping with admiration.” - Washington Post“This astute exploration of suburban aspirations and failings . . . . vividly demonstrates the wide-ranging effects of a single moment’s rash decision. . . . Beyond simply igniting the plot, the fateful slap draws attention to generational and philosophical differences regarding family life and the complex political, social, and ethnic milieu of contemporary Australia.” - Publishers Weekly“Radiates with vitality as it depicts the messy complications of family life.” - Booklist“Complex and multilayered. …intertwined lives and slowly revealed connections make for a singular reading experience.” - Library Journal“Wildly energetic and fearless, thrillingly about our lives now.” - Helen Garner, author of The Spare Room“A gripping suburban fable.” - Men’s Style
“Strikingly tender . . . it claws into you with its freshness and truth.” - Sydney Morning Herald