The China Fantasy: Why Capitalism Will Not Bring Democracy to China (Paperback) 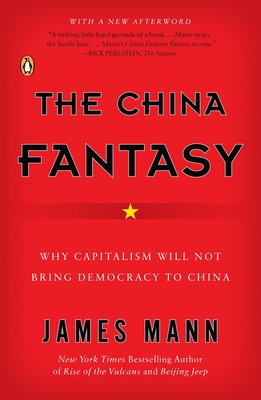 The China Fantasy: Why Capitalism Will Not Bring Democracy to China (Paperback)


Special Order—Subject to Availability
The book that got China right: a prophetic work on how America's policies towards China led it away from liberalization and further towards authoritarianism, from the bestselling author of Rise of the Vulcans

"[The China Fantasy] predicted, China would remain an authoritarian country, and its success would encourage other authoritarian regimes to resist pressures to change . . . Mann’s prediction turned out to be true." -New York Review of Books, October 2017

"From Clinton to Bush to Obama, the prevailing belief was engagement with China  would make China more like the West.  Instead, as [James] Mann predicted, China has gone in the opposite direction." -The New York Times, February 2018

One of our most perceptive China experts, James Mann wrote The China Fantasy as a vital wake-up call to all who are ignorant of America's true relationship with the Asian giant. For years, our leaders posited that China could be drawn to increasing liberalization through the power of the free market, but Mann asked us to consider a very real alternative: What if China's economy continues to expand but its government remains as dismissive of democracy and human rights as it is now?

Now the results are in: the reign of Xi Jinping has proven that Mann was right. To understand how China got to its current state and why it may not be too late to turn back, The China Fantasy is essential reading. Calling for an end to the current policy of overlooking China's abuses for the sake of business opportunities, Mann presents an alternative path to a better China.
James Mann is the senior writer in residence at the CSIS International Security Program and the author of two critically acclaimed books: About Face: A History of America’s Curious Relationship with China from Nixon to Clinton and Beijing Jeep. Previously, he was a long-time correspondent with the Los Angeles Times, and his writing has also appeared in The New Republic and The Atlantic Monthly.
"If Americans revered veteran China correspondents the way Chinese communists revere their founding revolutionaries, former Los Angeles Times bureau chief Jim Mann would justly be hailed as an 'immortal.'"
-Clay Chandler, editor, Fortune Asia