Mary McGrory: The Trailblazing Columnist Who Stood Washington on Its Head (Paperback) 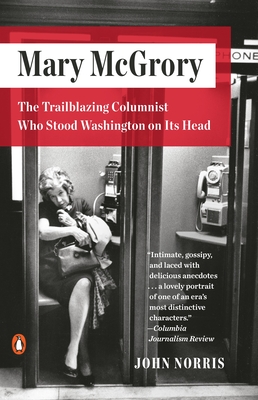 Mary McGrory: The Trailblazing Columnist Who Stood Washington on Its Head (Paperback)

Before there was Maureen Dowd or Gail Collins or Molly Ivins, there was Mary McGrory. She was a trailblazing columnist who achieved national syndication and reported from the front lines of American politics for five decades. From her first assignment reporting on the Army–McCarthy hearings to her Pulitzer-winning coverage of Watergate and controversial observations of President Bush after September 11, McGrory humanized the players on the great national stage while establishing herself as a uniquely influential voice. Behind the scenes she flirted, drank, cajoled, and jousted with the most important figures in American life, breaking all the rules in the journalism textbook. Her writing was admired and feared by such notables as Lyndon Johnson (who also tried to seduce her) and her friend Bobby Kennedy who observed, “Mary is so gentle—until she gets behind a typewriter.” Her soirees, filled with Supreme Court justices, senators, interns, and copy boys alike, were legendary. Writing about Donald Trump's first divorce in 19990, she said, "Watching the Trumps, Washington thinks of itself as wholesome.’”

As the red-hot center of the Beltway in a time when the newsrooms were dominated by men, McGrory makes for a powerfully engrossing subject. Laced with juicy gossip and McGrory’s own acerbic wit, John Norris’s colorful biography reads like an insider’s view of latter-day American history—and one of its most enduring characters.
John Norris is the executive director of the Sustainable Security and Peacebuilding Initiative at American Progress. Previously, he served as the Washington chief of staff for the International Crisis Group and the director of communications for U.S. Deputy Secretary of State Strobe Talbott. He has written for Politico, The Washington Post, the Los Angeles Times, and The Wall Street Journal.
“There’s no shortage of trenchant and witty takes on Donald Trump stuffing his golden feet in his mouth as Hillary Clinton trudges toward her likely victory. But if Mary McGrory were still here, I bet she would reign above the din. Born shortly before women gained the right to vote, she became one of the nation’s most widely syndicated columnists….best remembered for peerlessly capturing the essence of political animals over half a century of opinion writing… she did write about [Trump’s] family in 1990. ‘The defense budget is the closest we come to the sums being talked of in the divorce settlement between Ivana and Donald,’ McGrory said of the Republican nominee’s first divorce. ‘Watching the Trumps, Washington thinks of itself as wholesome.’”
Emily Schwartz Greco, BillMoyers.com


“Mary McGrory: The First Queen of Journalism will scratch every nostalgic itch with ink-stained fingers. McGrory’s five-decade career covering Washington provides an enormous picture window onto the media landscape, and Norris . . . focuses much of his attention on the glamour of the era. . . . You may find yourself beguiled by [McGrory] as well. I realized I was under her spell at the end of the book.”
—New York Times Book Review

“Any person of spirit, who loves good writing, will almost feel, after reading this book, that he or she did have a chance to dance the rumba toward dawn with Mary McGrory.”
—Roy Blount Jr.

"Depicted with admiration by writer John Norris, McGrory is what you get when proximity to power, keen observation skills, painstaking reporting, a judgmental streak and passionate liberalism coalesce in a singularly talented writer."
—The Washington Post

"A lively and affectionate biography of perhaps the most consequential liberal voice of the late 20th century."
—The Boston Globe

“Mary McGrory’s life as a Pulitzer Prize-winning Washington columnist is so interesting that it’s hard to understand why there hasn’t been a book about her until now. Enter Norris . . . with this balanced, page-turning biography . . . Ted Kennedy proclaimed [McGrory] ‘poet laureate of American journalism,’ and this nuanced portrait provides plenty of evidence.”
—Kirkus (starred review)

“A dame, a babe, a wit, a raconteur, McGrory was the ultimate journalist: interested, interesting, discerning, dedicated. Her curiosity and charm, intelligence and integrity were nonpareil and earned her coveted insider access to the most important events and people of the last half of the twentieth century. She laid the groundwork for generations of journalists of both genders for decades to come. Few biographies are page-turners, but Norris’s vivid account of this pioneering writer so vibrantly recalls the heady heyday of op-ed journalism that readers will avidly mourn the advent of the 24/7 cable and talk radio punditry that took its place. McGrory was an icon of wit and wisdom; we will not see her like again.”
—Booklist (starred review)

“Sensitive and engrossing . . . [this] book is a rich portrait, and will likely encourage readers to seek more of McGrory’s groundbreaking writing.”
—Publishers Weekly

“Norris . . . earns his reader's respect with careful attention to detail and a precarious but precise balance between his primary, individual subject and the context of U.S. and world history. Mary McGrory is a striking story, meticulously and entertainingly portrayed.”
—Shelf Awareness

“Intimate, gossipy, and laced with delicious anecdotes . . . wonderfully evokes the glorious dishevelment and camaraderie of both the mid-century newsroom and the campaign trail. . . . As newspapers struggle and fade, Mary McGrory offers a paean to their most vibrant era, as well as a lovely portrait of one of its most distinctive characters.”
—Columbia Journalism Review