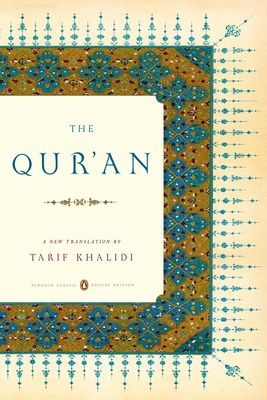 Literally "the recitation," The Qur'an is considered within the Muslim faith to be the infallible word of God. Tarif Khalidi, the foremost scholar of Islamic history and faith, provides a fresh English translation that captures the startling, exquisite poetry of one of the world's most beloved religious texts. Retaining the structure and rhythms of the original Arabic, Khalidi enlivens the ancient teachings and prophetic narratives central to the Muslim faith and solidifies The Qur'an as a work of spiritual authority and breathtaking beauty.

For more than seventy years, Penguin has been the leading publisher of classic literature in the English-speaking world. With more than 1,700 titles, Penguin Classics represents a global bookshelf of the best works throughout history and across genres and disciplines. Readers trust the series to provide authoritative texts enhanced by introductions and notes by distinguished scholars and contemporary authors, as well as up-to-date translations by award-winning translators.
Tarif Khalidi was born in Jerusalem in 1938. He received degrees from University College, Oxford, and the University of Chicago, before teaching at the American University of Beirut as a professor in the Department of History from 1970 to 1996. In 1985 he accepted a one-year position as senior research associate at St Anthony's College, Oxford, and from 1991 to 1992 was a visiting overseas scholar at St John's College, Cambridge. In 1996, Tarif Khalidi left Beirut to become the Sir Thomas Adams' Professor of Arabic at Cambridge University, the oldest chair of Arabic in the English-speaking world. He was also Director of the Centre for Middle East and Islamic Studies and a Fellow of King's College, Cambridge. After six years, Professor Khalidi returned to the American University of Beirut, taking on the Sheikh Zayed Chair in Islamic and Arabic Studies, the first chair to be filled at the University since the civil war.
"An eloquent and eminently readable translation . . . much closer to the way the first Muslims experienced the Qur'an."
-Reza Aslan, author of Zealot

" While being faithful to the original, [Khalidi] succeeds in conveying linguistic shifts, from narrative to mnemonic, sermons to parables. And there is an innovative component: it is the first translation that tries to capture both the rhythms and the structure of the Qur'an. . . . This translation manages to give a glimpse of the grandeur of the original. . . . A magnificent achievement."
-Ziauddin Sardar, The Guardian (London)

"What sets Khalidi apart from his predecessors is his sensitivity to the sounds and many layers of meaning of the original as well as his skill in conveying them to an anglophone audience...Khalidi's introduction and bibliographic note are marvelously succinct, explaining the textual nature and structure of the Qur'an, its place in Muslim life, and providing a very useful summary of recent research and further reading...a landmark in the history of English translations of the Qur'an."
--Ziad Elmarsafy, Times Literary Supplement