The Heart of the World: A Journey to Tibet's Lost Paradise (Paperback) 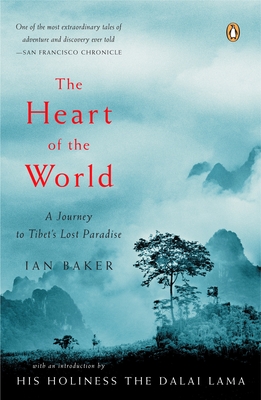 The Heart of the World: A Journey to Tibet's Lost Paradise (Paperback)


Special Order—Subject to Availability
The myth of Shangri-la originates in Tibetan Buddhist beliefs in beyul, or hidden lands, sacred sanctuaries that reveal themselves to devout pilgrims and in times of crisis. The more remote and inaccessible the beyul, the vaster its reputed qualities. Ancient Tibetan prophecies declare that the greatest of all hidden lands lies at the heart of the forbidding Tsangpo Gorge, deep in the Himalayas and veiled by a colossal waterfall. Nineteenth-century accounts of this fabled waterfall inspired a series of ill-fated European expeditions that ended prematurely in 1925 when the intrepid British plant collector Frank Kingdon-Ward penetrated all but a five-mile section of the Tsangpo’s innermost gorge and declared that the falls were no more than a “religious myth” and a “romance of geography.”

The heart of the Tsangpo Gorge remained a blank spot on the map of world exploration until world-class climber and Buddhist scholar Ian Baker delved into the legends. Whatever cryptic Tibetan scrolls or past explorers had said about the Tsangpo’s innermost gorge, Baker determined, could be verified only by exploring the uncharted five-mile gap. After several years of encountering sheer cliffs, maelstroms of impassable white water, and dense leech-infested jungles, on the last of a series of extraordinary expeditions, Baker and his National Geographic–sponsored team reached the depths of the Tsangpo Gorge. They made news worldwide by finding there a 108-foot-high waterfall, the legendary grail of Western explorers and Tibetan seekers alike.

The Heart of the World is one of the most captivating stories of exploration and discovery in recent memory—an extraordinary journey to one of the wildest and most inaccessible places on earth and a pilgrimage to the heart of the Tibetan Buddhist faith.
Ian Baker has lived in Kathmandu, Nepal, and been a student of Tibetan Buddhism for more than twenty years. He studied fine arts, literature, and comparative religion at Middlebury College, Oxford University, and Columbia University. He has written several books on Tibet and Tibetan Buddhism, including The Tibetan Art of Healing, Celestial Gallery, and The Dalai Lama’s Secret Temple: Tantric Wall Paintings from Tibet. He is also the coauthor of Tibet: Reflections from the Wheel of Life and has contributed articles to Explorers Journal and National Geographic magazine. He currently divides his time among New York, Thailand, and the Himalayas.
"The Heart of the World is among the most complex, compelling and satisfying adventure books I have ever read.... Baker has written one for the ages." —The San Francisco Chronicle

"Up to its chin in physical adventure. Reading the book is itself a big, almost a transcendent, experience." —Adventure Magazine