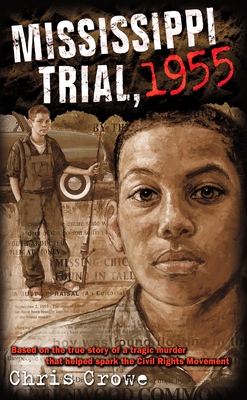 
Not On Our Shelves—Ships in 1-5 Days
Winner of the 2003 International Reading Association Award for Young Adult Novel. This gripping read is based on the true events of the murder of Emmett Till, one of the nation's most notorious crimes that helped spark the Civil Rights Movement.


At first Hiram is excited to visit his hometown in Mississippi. But soon after he arrives, he crosses paths with Emmett Till, a black teenager from Chicago who is also visiting for the summer. Hiram sees firsthand how the local whites mistreat blacks who refuse to "know their place." When Emmett's tortured dead body is found floating in a river, Hiram is determined to find out who could do such a thing. But what will it cost him to know?
Chris Crowe is the author of several books, most notably Mississippi Trial, 1955, which won several awards, including the 2003 International Reading Association's Young Adult Novel Award. His nonfiction book, Getting Away with Murder: The True Story of the Emmett Till Case, was an Jane Addams Honor book. His first children's book, Just As Good: How Larry Doby Changed America's Game, appeared in 2012. Chris married his high school sweetheart, and they live in Provo, Utah, where he works in the English department at BYU. They are the parents of four children and grandparents of two lovely girls and three handsome boys.
"Will get readers thinking."--Publishers Weekly

"Teen readers will find themselves caught up in Hiram's very real struggle to do the right thing."--Kirkus Reviews

"This book belongs in all collections to show young readers the full range of American history."--School Library Journal

"This is a thoughtful story that rises above a mere retelling of one episode in the South's racist past."--Children's Literature