The Legend of Luke: A Tale from Redwall (Paperback) 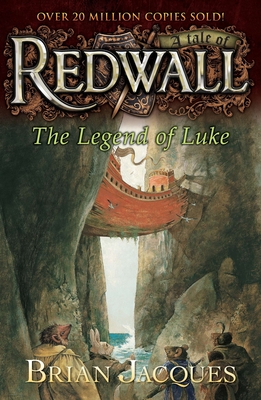 The Legend of Luke: A Tale from Redwall (Paperback)

This is book number 12 in the Redwall series.

In this twelfth book of the masterful Redwall epic, storyteller Brian Jacques goes back in time to the days before Redwall, revealing with dramatic poignancy the legend of the first of the magnificent Redwall warriors--Luke, father of Martin.

Joined by Trimp the Hedgehog, Dinny Foremole, and Gonff--the ever-mischievous Prince of Mousethieves--it is that legend Martin hopes to discover when he embarks on a perilous journey to the northland shore, where his father abandoned him as a child. There, within the carcass of a great red ship--broken in half and wedged high up between pillars of stone--he finally uncovers what he has been searching for: the true story of the evil pirate stoat, Vilu Daskar, and the valiant warrior who pursued him relentlessly over the high seas, seeking to destroy Vilu at all costs, even if it m
meant deserting his only son.

"This book is likely to appeal to adolescent readers who have found a friend in the Harry Potter stories."—The ALAN Review

Brian Jacques (redwallabbey.com) was born in Liverpool in 1939. He left school at age fifteen and found work as a docker, a truck driver, a policeman and a stand-up comic, all before turning his attention to writing. He wrote his first novel, Redwall, for the children at a school for the blind in Liverpool. Since 1986, his descriptive style of writing has captivated readers from age 8 to 80. His books have won international awards and acclaim and have been made into a TV series.
Praise for The Legend of Luke...

"This fast-paced novel will delight new or returning readers to the Redwall series."—Children's Literature

"For readers new to the series, the book stands alone as an exciting adventure into Martin the Warrior's heritage of courage and integrity . . . This book is likely to appeal to adolescent readers who have found a friend in the Harry Potter stories."—The ALAN Review

"Full of daring deeds, this tale will appeal to fans of the series as well as readers who enjoy animal fantasies and adventure stories."—KLIATT