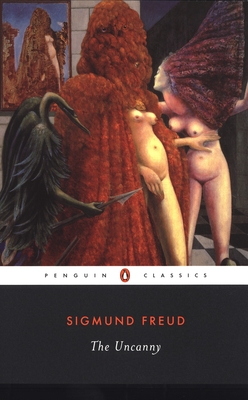 
Not On Our Shelves—Ships in 1-5 Days
Freud was fascinated by the mysteries of creativity and the imagination. The groundbreaking works that comprise The Uncanny present some of his most influential explorations of the mind. In these pieces Freud investigates the vivid but seemingly trivial childhood memories that often "screen" deeply uncomfortable desires; the links between literature and daydreaming; and our intensely mixed feelings about things we experience as "uncanny." Also included is Freud's celebrated study of Leonardo Da Vinci-his first exercise in psychobiography.

For more than seventy years, Penguin has been the leading publisher of classic literature in the English-speaking world. With more than 1,700 titles, Penguin Classics represents a global bookshelf of the best works throughout history and across genres and disciplines. Readers trust the series to provide authoritative texts enhanced by introductions and notes by distinguished scholars and contemporary authors, as well as up-to-date translations by award-winning translators.
Sigmund Freud (1856-1939) was born in Moravia and lived in Vienna between the ages of four and eighty-two. In 1938 Hitler's invasion of Austria forced him to seek asylum in London, where he died the following year. Freud's career began with several years of brilliant work on the anatomy and physiology of the nervous system. He was almost thirty when, after a period of study under Charcot in Paris, his interests first turned to psychology, and another ten years of clinical work in Vienna (at first in collaboration with Breuer, an older colleague) saw the birth of his creation: psychoanalysis. This began simply as a method of treating neurotic patients by investigating their minds, but it quickly grew into an accumulation of knowledge about the workings of the mind in general, whether sick or healthy. Freud was thus able to demonstrate the normal development of the sexual instinct in childhood and, largely on the basis of an examination of dreams, arrived at his fundamental discovery of the unconscious forces that influence our everyday thoughts and actions. Freud's life was uneventful, but his ideas have shaped not only many specialist disciplines, but the whole intellectual climate of the last half-century.
"[Freud] ultimately did more for our understanding of art than any other writer since Aristotle." (Lionel Trilling)