The Caldera (The Brotherband Chronicles #7) (Paperback) 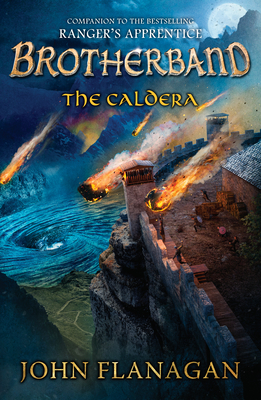 The Caldera (The Brotherband Chronicles #7) (Paperback)


Not On Our Shelves—Ships in 1-5 Days
The Herons take to the high seas to fend off pirates and rescue the heir to an empire in the newest adventure from John Flanagan, author of the worldwide bestselling Ranger's Apprentice!

In Hallasholm, Stig is contesting the annual Maktig competition to decide Skandia’s greatest warrior. But a late-night knock on the door brings someone Stig never expected to see again, along with a request the Herons are hard-pressed to refuse: a rescue mission of epic proportions.

Across the ocean, the southern city-state of Byzantos is plagued by a crew of pirates who’ve kidnapped the son of Empress Justina. Slipping out of Hallasholm under the cover of darkness, the brotherband sets sail to recover the boy from his kidnappers, heading south to the island of Santorillos where a near-impenetrable fortress stands atop a cliff, surrounded by a lagoon—a caldera—formed by the crater of a volcano.

In this explosive seventh book in the action-packed Brotherband Chronicles, the Herons battle pirates amid stormy seas as the fate of an empire rests on their shoulders.
John Flanagan (www.WorldofJohnFlanagan.com) grew up in Sydney, Australia, hoping to be a writer, and after a successful career in advertising and television, he began writing a series of short stories for his son, Michael, in order to encourage him to read. Those stories would eventually become The Ruins of Gorlan, Book 1 of the Ranger’s Apprentice epic. Together with his companion series, Brotherband Chronicles, the novels of John Flanagan have sold millions of copies and made readers of kids the world over. Mr. Flanagan lives in the suburb of Mosman, Australia, with his wife. In addition to their son, they have two grown daughters and four grandsons.