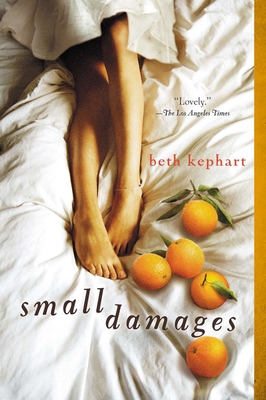 
Special Order—Subject to Availability
Juno meets Under the Tuscan Sun

It's senior year, and while Kenzie should be looking forward to prom and starting college in the fall, she discovers she's pregnant. Her determination to keep her baby is something her boyfriend and mother do not understand. So she is sent to Spain, where she will live out her pregnancy, and her baby will be adopted by a Spanish couple. No one will ever know.

Alone and resentful in a foreign country, Kenzie is at first sullen and difficult. But as she gets to know Estela, the stubborn old cook, and Esteban, the mysterious young man who cares for the horses, she begins to open her eyes, and her heart, to the beauty that is all around her, and inside her. Kenzie realizes she has some serious choices to make--choices about life, love, and home.

Lyrically told in a way that makes the heat, the colors, and the smells of Spain feel alive, Small Damages is a feast for the heart and the soul, and a coming-of-age novel not easily forgotten.
Beth Kephart is the award-winning author of more than a dozen books. She teaches creative nonfiction at the University of Pennsylvania. When she's not writing or teaching, she loves to take photographs and to garden. Beth lives in Devon, Pennsylvania.
“Lovely” —The Los Angeles Times

“Stunning. Kephart’s lyrical prose lingers with you long after the final page. I simply didn’t want it to end.”—Ruta Sepetys, author of the New York Times bestseller Between Shades of Gray

“As this delicate and luscious novel unfolds, the lines are blurred between love and loss, past and present, real and magical, and even life and death.”—Kathryn Erskine, author of National Book Award winner Mockingbird

“‘Dreamlike’ is one word for Small Damages…[Kenzie’s] percolating story emerges through Kephart’s lilting prose in the same hazy way you’d meander through the narrow white streets of Seville…The novel is a story about choices…but also about finding one’s self.” —New York Times Book Review

“ Kephart is a linguistic Midas — everything she puts to paper is golden, including this gem.” —Family Circle

“[Kephart’s] prose is nearly poetic… it all works to create her own vivid style.” —Romantic Times Book Reviews

"This beautifully written ‘summer of transformation’ story will have readers feeling as torn about Kenzie’s choice as she is.” —Publishers Weekly, starred review

“Beautifully told, the characters’ stories are soulful and compelling, and the setting is rich and alive.” —SLJ

“Kephart has created a lyrical, beautiful story about a young woman at a turning point, struggling to reconcile her choices, find her place in the world and discover the true meaning of family.” —BookPage

“As soon as the book ends, we want to begin it again.” —Shelf Awareness