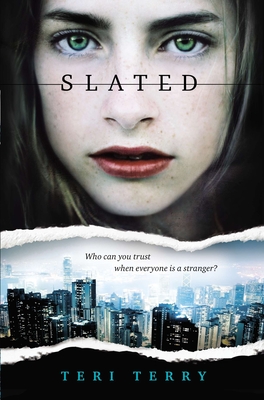 This is book number 1 in the Slated series.

The gripping first book of a rebellious trilogy about truth, power, and impossible choices, perfect for fans of Divergent and Legend.

Kyla’s memory has been erased, her personality wiped blank, her memories lost forever. She’s been slated. The government claims that she was a terrorist and they are giving her a second chance—if she plays by their rules. But scenes from the past haunt her as she tries to adjust to a new life, family, and school, leaving her unsettled. Who is she really? And if only criminals are meant to be slated, why are so many other teens disappearing? As she and her friend Ben seek answers, Kyla is torn between the need to know more and her instinct for self-preservation.

"A suspenseful page-turner with a highly sympathetic and strong female protagonist. . . . Will have readers waiting eagerly for a sequel.” —Booklist


Teri Terry (teriterry.jimdo.com) is Canadian by birth, and has lived in France, Canada, and Australia. She currently divides her time between writing and doing a research MA on the depiction of terrorism in young adult literature since the 9/11 attacks in America. Slated is her debut novel. She lives in Buckinghamshire, United Kingdom.
Praise for SLATED

“Terry’s world is remarkably like today’s. . . . The romance and politics keep suspense ratcheted up. Intriguing—readers will be on tenterhooks for the next one.”—Kirkus Reviews

“Terry’s debut is a suspenseful page-turner with a highly sympathetic and strong female protagonist. A perverse sense of claustrophobic dread grows throughout the novel. . . . Will have readers waiting eagerly for a sequel.”—Booklist

“Building on an intriguing concept . . .What truly makes this novel stand out from the dystopian pack, though, is the well-crafted suspense. . . . Readers will anxiously await sequels to come.”—BCCB

"Even if you're sick of teenage dystopias, this paranoid mind-wiping novel will thrill you. . . . Excellent. . . . Kyla's erased memory works wonderfully as a storytelling device."—io9