The Sable Quean: A Tale from Redwall (Paperback) 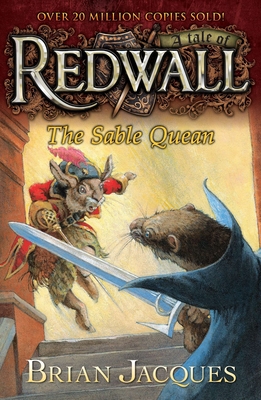 The Sable Quean: A Tale from Redwall (Paperback)

This is book number 21 in the Redwall series.

The beloved Redwall saga continues in The Sable Quean.

The devious ruler Vilaya the Sable Quean and her hordes of vermin have a plan to conquer Redwall. And when the Dibbuns go missing, the plan is revealed. Will the Redwallers risk their Abbey and all of Mossflower Wood to save their precious young ones? Perhaps Buckler, Blademaster of the Long Patrol, can save the day. He has a score of his own to settle. And fear not, the Dibbuns are not as innocent as they appear. After all, they're from Redwall!

Perfect for fans of T. A. Barron’s Merlin saga, John Flanagan’s Ranger’s Apprentice series, and J. R. R. Tolkien’s Lord of the Rings series.
Dr. Brian Jacques was both a master storyteller and a jack-of-all-trades. He lived the life of a sailor, actor, stand-up comedian, radio host, bobby, even a bus driver. He was the recipient of an honorary doctorate in literature from the University of Liverpool and a New York Times bestselling author of more than twenty-five books for younger readers, including the wildly popular Redwall series. Dr. Jacques was a lifelong resident of Liverpool, England.