Doomwyte: A Tale from Redwall (Paperback) 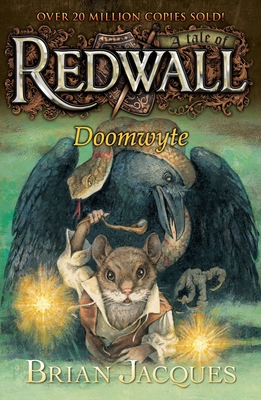 Doomwyte: A Tale from Redwall (Paperback)

This is book number 20 in the Redwall series.

On a moonless night, two rats follow hypnotic lights into the forest, never to be seen again. Such is the power of the Doomwytes, sinister ravens led by the deadly Korvus Skurr. And when the young mouse Bisky persuades the creatures of Redwall to go in search of a fabled treasure, hidden long ago by one of the abbey's most notorious thieves, they do not suspect Skurr and his ravens will be vying for the same prize. . . .

Brian Jacques was born in Liverpool in 1939. He left school at age fifteen and found work as a docker, a truck driver, a policeman and a stand-up comic, all before turning his attention to writing. He wrote his first novel, Redwall, for the children at a school for the blind in Liverpool. Since 1986, his descriptive style of writing has captivated readers from age 8 to 80. His books have won international awards and acclaim and have been made into a TV series.

"The latest installment in the phenomenally popular Redwall series will captivate fans." -Booklist