Eulalia!: A Tale from Redwall (Paperback) 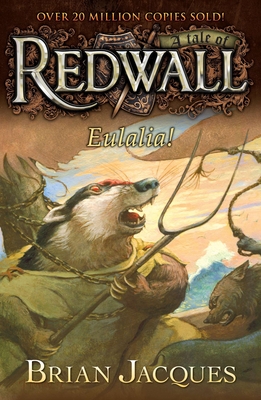 Eulalia!: A Tale from Redwall (Paperback)

This is book number 19 in the Redwall series.

The golden fox Vizka Longtooth and his scurrilous crew of Sea Raiders are bound for plunder and conquest; in their ship's hold, a young badger lies captive. At the same time, the aged badger lord of Salamandastron has sent forth a haremaid, questing for his successor. A brownrat chieftain, with his savage horde, ravages Mossflower Country. The fate of all these creatures, good and evil, is caught up in this saga of war and destiny. The war cry thunders out across the land--Eulalia!

Perfect for fans of T. A. Barron’s Merlin saga, John Flanagan’s Ranger’s Apprentice series, and J. R. R. Tolkien’s Lord of the Rings series.
Brian Jacques was born in Liverpool in 1939. He left school at age fifteen and found work as a docker, a truck driver, a policeman and a stand-up comic, all before turning his attention to writing. He wrote his first novel, Redwall, for the children at a school for the blind in Liverpool. Since 1986, his descriptive style of writing has captivated readers from age 8 to 80. His books have won international awards and acclaim and have been made into a TV series.