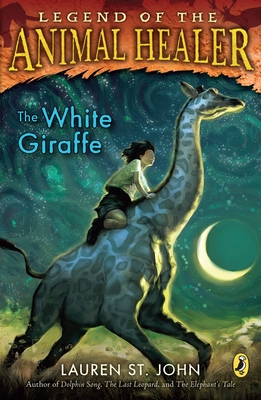 
Special Order—Subject to Availability
The first exciting book in the dramatic Legend of the Animal Healer series!

The night Martine Allen turns eleven years old is the night her life changes completely. Martine's parents are killed in a fire, so she must leave her home to live on an African wildlife reserve with a grandmother she never even knew she had. When Martine arrives, she hears tales of a mythical animal living there-a white giraffe. They say no one has ever seen the animal, but it does leave behind footprints. Her grandmother insists that the white giraffe is just a legend, but then, one stormy night, Martine looks out her bedroom window straight into the eyes of the tall silvery animal. Could it be just Martine's imagination, or is the white giraffe real? And if so, why is everyone keeping its existence a secret?

Lauren St. John lives in London, England. A well-respected biographer and sports journalist, she grew up in Zimbabwe, Africa, where she had a pet giraffe, as well as numerous dogs, horses, and warthogs. This setting inspired The White Giraffe as well as her recent memoir, Rainbow’s End.