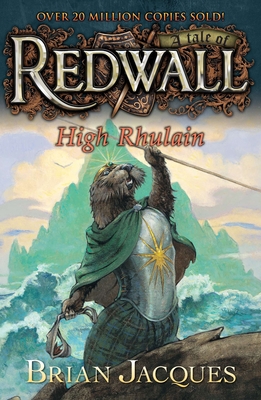 This is book number 18 in the Redwall series.

The adventure continues in the next installment of the bestselling Redwall saga, High Rhulain.

The otters of Green Isle have long been enslaved to the Wildcat Riggu Felis. They work and wait for the day their savior will arrive, the prophesized High Rhulain, who will lead them in battle and a return to glory. Meanwhile, young Tiria Wildlough, an ottermaid at Redwall Abbey, pines for her chance to learn the ways of the warrior, much against the wishes of her father. So when an injured osprey arrives at the Abbey, seeking help for its wounds and carrying tales of an embattled clan of otters, young Tiria knows what she must do.

Perfect for fans of T. A. Barron’s Merlin saga, John Flanagan’s Ranger’s Apprentice series, and J. R. R. Tolkien’s Lord of the Rings series.
Brian Jacques was both a master storyteller and a jack-of-all-trades. He lived the life of a sailor, actor, stand-up comedian, radio host, bobby, even a bus driver. He was the recipient of an honorary doctorate in literature from the University of Liverpool and a New York Times bestselling author of more than twenty-five books for younger readers, including the wildly popular Redwall series. Dr. Jacques was a lifelong resident of Liverpool, England.
Brian Jacques lives in Liverpool, England. David Elliot lives in New Zealand.