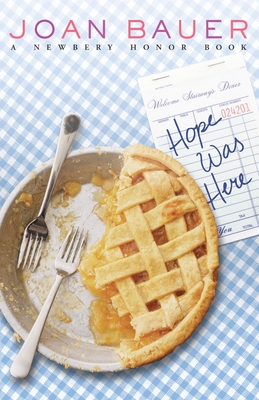 When Hope and her aunt move to small-town Wisconsin to take over the local diner, Hope's not sure what to expect. But what they find is that the owner, G.T., isn't quite ready to give up yet--in fact, he's decided to run for mayor against a corrupt candidate. And as Hope starts to make her place at the diner, she also finds herself caught up in G.T.'s campaign--particularly his visions for the future. After all, as G.T. points out, everyone can use a little hope to help get through the tough times . . . even Hope herself.

Filled with heart, charm, and good old-fashioned fun, this is Joan Bauer at her best.

* “When it comes to creating strong, independent, and funny teenaged female characters, Bauer is in a class by herself ... Bauer tells a fast-paced, multilayered story with humor but does not gloss over the struggle[s].”—School Library Journal, starred review

“Bauer has succeeded in creating another quirky, poignant, and funny novel about a strong girl who admits her frailties ... Hope’s story is highly recommended for both middle and high school students.”—VOYA

“Another entry in Bauer’s growing collection of books about likable and appealing female teenagers with a strong vocational calling ... As always from Bauer, this novel is full of humor, starring a strong and idealistic protagonist, packed with funny lines, and peopled with interesting and quirky characters.” —Kirkus Reviews

Joan Bauer has won critical acclaim for her many books, which include Rules of the Road, winner of the Los Angeles Times Book Prize, Close to Famous, and Peeled. She lives in Brooklyn, New York.