Triss: A Tale from Redwall (Paperback) 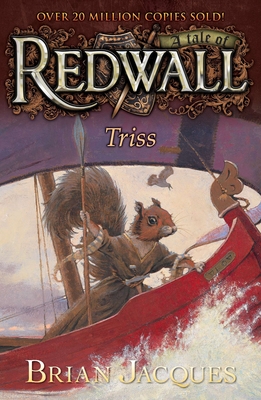 Triss: A Tale from Redwall (Paperback)

This is book number 15 in the Redwall series.

Enslaved by the evil ferret King Agarno and his daughter, Princess Kurda, the brave squirrelmaid Triss, along with Shogg the otter and Welfo the hedgehog, plans a daring escape by sea. In her flights, Triss happens upon Redwall, and the abbey creatures discover a new hero in her. Someone brave enough to carry the sword of Martin and face the evil that threatens them.

Brian Jacques (www.redwallabbey.com) was born in Liverpool in 1939. He left school at age fifteen and found work as a docker, a truck driver, a policeman and a stand-up comic, all before turning his attention to writing. He wrote his first novel, Redwall, for the children at a school for the blind in Liverpool. Since 1986, his descriptive style of writing has captivated readers from age 8 to 80. His books have won international awards and acclaim and have been made into a TV series.
Praise for Triss

"Jacques's fervent followers are rewarded with the author's usual swashbuckling good storytelling, while the newly initiated will read with wide eyes, and quickly go back to hungrily devour the rest of the series."--Amazon.com