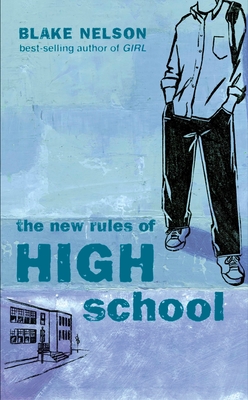 
Special Order—Subject to Availability
Max is the consummate high school overachiever. Straight-A student, debate team captain, future editor of the school paper, dutiful Max does what's expected, until the day he inexplicably breaks up with Cindy, his perfect girlfriend. Is their relationship too much to handle on top of everything else? Or is Max just tired of doing everything he's supposed to? As Max begins to question his life, all of the old rules dissolve—and he searches in some very unlikely places for new ones.

"Nelson, it seems, possesses that peculiar and particular ability, granted to only a few—the Judy Blumes and J. D. Salingers of this world—to accurately portray the mysterious inner life of the American teenager."
—Time Out New York

Blake grew up in Portland, Oregon.

His first love was books but he spent several years in his teens and twenties playing in bands.

Blake's first writing job was at Details magazine, where he wrote short humor pieces on the slacker lifestyle. His fiction remained unpublished until Sassy Magazine (cool girl magazine from the 90s) began publishing excerpts from his first novel.

These excerpts generated enough response to get his first novel GIRL published by Simon and Schuster. GIRL (1994) has since been translated into six foreign languages and was made into a feature film.

After GIRL, Blake published two more adult novels, EXILE (1997) and USER (2001). In 2003 he decided to try a Young Adult novel, (a book specifically for teens) and wrote THE NEW RULES OF HIGH SCHOOL. Since then he has published five YA novels, NEW RULES, ROCKSTAR SUPERSTAR, PROM ANONYMOUS, GENDER BLENDER, and PARANOID PARK.

His books have won numerous awards and continue to be translated around the world. A TV movie for GENDER BLENDER is currently in development at Nickelodeon. And PARANOID PARK, is being made into a film by Gus Van Sant and MK2 Productions.

Blake Nelson currently lives with his wife in Brooklyn, NY.