Pearls of Lutra: A Tale from Redwall (Paperback) 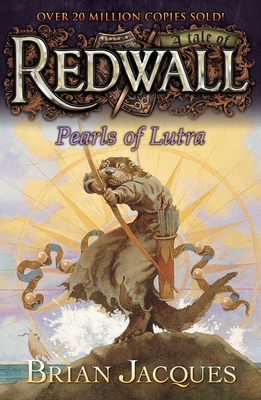 Pearls of Lutra: A Tale from Redwall (Paperback)

This is book number 9 in the Redwall series.

The search for the pearls is underway in the next installment of the beloved and bestselling Redwall series.

The Tears of All Oceans are missing. Six magnificent rose-colored pearls, which inspire passion and greed in all who see them, have been stolen and passed from hand to hand, leaving a cryptic trail of death and deception in their wake. And now Ublaz Mad Eyes, the evil emperor of a tropical isle, is determined to let no one stand in the way of his desperate attempt to claim the pearls as his own. At Redwall Abbey, a young hedgehog maid, Tansy, is equally determined to find the pearls first, with the help of her friends. And she must succeed, for the life of the one she holds dear is in great danger...

Perfect for fans of T. A. Barron’s Merlin saga, John Flanagan’s Ranger’s Apprentice series, and J. R. R. Tolkien’s Lord of the Rings series.
Brian Jacques (www.redwallabbey.com) was born in Liverpool in 1939. He left school at age fifteen and found work as a docker, a truck driver, a policeman and a stand-up comic, all before turning his attention to writing. He wrote his first novel, Redwall, for the children at a school for the blind in Liverpool. Since 1986, his descriptive style of writing has captivated readers from age 8 to 80. His books have won international awards and acclaim and have been made into a TV series. He died in 2011.
Praise for Pearls of Lutra

"Devoted fans of Jacques . . . will snap this off the shelf without any prompting."--School Library Journal