Outcast of Redwall: A Tale from Redwall (Paperback) 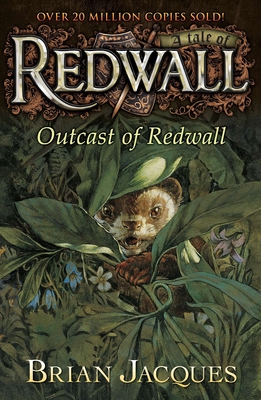 Outcast of Redwall: A Tale from Redwall (Paperback)

This is book number 8 in the Redwall series.

Energetic and poignant as ever, Jacques' Outcast of Redwall is another must-read in the bestselling Redwall series.

Abandoned as an infant by his father, the evil warlord Swartt Sixclaw, Veil is raised by the kindhearted Bryony. Despite concerns from everyone at Redwall, Bryony is convinced that Veil's goodness will prevail. But when he commits a crime that is unforgivable, he is banished from the abbey forever. Then Swartt and his hordes of searats and vermin attack Redwall, and Veil has to decide: Should he join Swartt in battle against the only creature who has ever loved him? Or should he turn his back on his true father?

Perfect for fans of T. A. Barron’s Merlin saga, John Flanagan’s Ranger’s Apprentice series, and J. R. R. Tolkien’s Lord of the Rings series.
Brian Jacques (redwallabbey.com) was born in Liverpool in 1939. He left school at age fifteen and found work as a docker, a truck driver, a policeman and a stand-up comic, all before turning his attention to writing. He wrote his first novel, Redwall, for the children at a school for the blind in Liverpool. Since 1986, his descriptive style of writing has captivated readers from age 8 to 80. His books have won international awards and acclaim and have been made into a TV series.
Praise for Outcast of Redwall