The Bellmaker: A Tale from Redwall (Paperback) 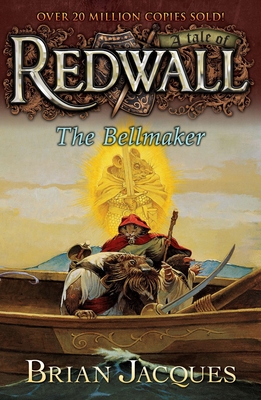 The Bellmaker: A Tale from Redwall (Paperback)

This is book number 7 in the Redwall series.

It has been four seasons since Mariel, the warrior-mouse daughter of Joseph the Bellmaker, and her companion, Dandin, set off from Redwall to fight evil in Mossflower. Nothing has been heard of them since. Then one night, in a dream, the legendary Martin the Warrior comes to the Bellmaker with a mysterious message. Clearly, Mariel and Dandin are in grave danger. Joseph and four Redwallers set off at once to aid them. As they push over land and sea, they cannot know the terrible threats they face. Will the Bellmaker and his companions arrive in time to help Mariel and Dandin?

"This is storytelling at its best."—School Library Journal
Brian Jacques (redwallabbey.com) was born in Liverpool in 1939. He left school at age fifteen and found work as a docker, a truck driver, a policeman and a stand-up comic, all before turning his attention to writing. He wrote his first novel, Redwall, for the children at a school for the blind in Liverpool. Since 1986, his descriptive style of writing has captivated readers from age 8 to 80. His books have won international awards and acclaim and have been made into a TV series.
"This is storytelling at its best."—School Library Journal

"For the seventh volume of the Redwall series, Jacques sticks to the tried-and-true formula action aplenty and a huge cast of woodland creatures that has won him such a dedicated following . . . A seemingly endless stream of cliff-hangers and dazzling combat winds its way through lovingly described forest feasts."—Publishers Weekly