Mattimeo: A Tale from Redwall (Paperback) 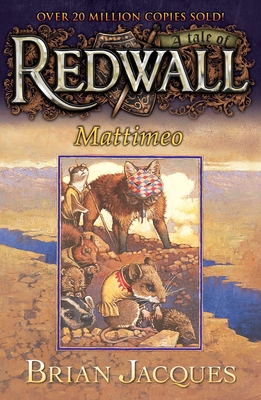 Mattimeo: A Tale from Redwall (Paperback)

This is book number 3 in the Redwall series.

The heroic adventures of Redwall continue with another epic tale overflowing with valorous personality, from the beloved, bestselling saga.

Slagar the Fox is determined to vanquish peaceable Redwall. Gathering his mercenary band of rats, stoats, and weasels, he advances upon the abbey with a cunning scheme: rather than making courageous battle plans, he will steal the children of Redwall from under their parents' very noses. And his prize captive will be Mattimeo, the headstrong young son of Matthias, the fearless mouse warrior!

Perfect for fans of T. A. Barron’s Merlin saga, John Flanagan’s Ranger’s Apprentice series, and J. R. R. Tolkien’s Lord of the Rings series.
Brian Jacques (www.redwallabbey.com) was born in Liverpool in 1939. He left school at age fifteen and found work as a docker, a truck driver, a policeman and a stand-up comic, all before turning his attention to writing. He wrote his first novel, Redwall, for the children at a school for the blind in Liverpool. Since 1986, his descriptive style of writing has captivated readers from age 8 to 80. His books have won international awards and acclaim and have been made into a TV series.