Mutants: On Genetic Variety and the Human Body (Paperback) 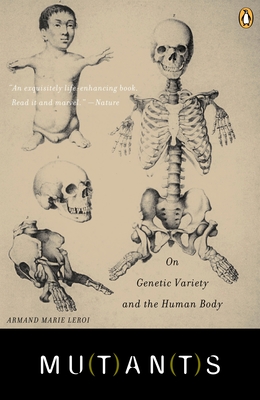 Mutants: On Genetic Variety and the Human Body (Paperback)

Stepping effortlessly from myth to cutting-edge science, Mutants gives a brilliant narrative account of our genetic code and the captivating people whose bodies have revealed it—a French convent girl who found herself changing sex at puberty; children who, echoing Homer’s Cyclops, are born with a single eye in the middle of their foreheads; a village of long-lived Croatian dwarves; one family, whose bodies were entirely covered with hair, was kept at the Burmese royal court for four generations and gave Darwin one of his keenest insights into heredity. This elegant, humane, and engaging book “captures what we know of the development of what makes us human” (Nature).

Armand Marie Leroi has lived in South Africa, Canada, and the United States. Since 1996, he has been a lecturer in evolutionary genetics at Imperial College, London. He has published widely in technical journals on evolutionary and developmental genetics and writes occasionally for the London Review of Books.

"A marvelous accomplishment. A good look a the amazing prospect before us as we decode the human genome..." —The Seattle Times